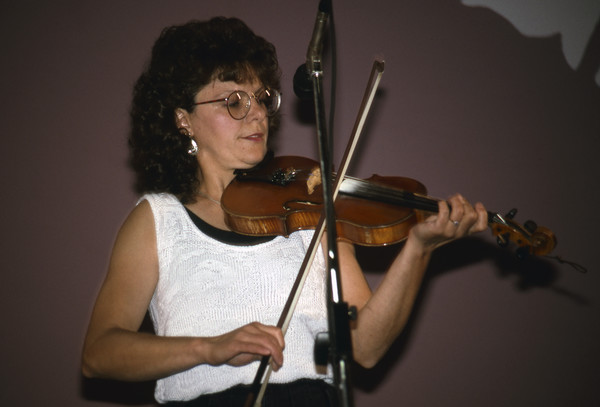 Louise Gallant Arsenault grew up in a large musical family; before her family home got hooked up to electricity in 1967, her family often played music together in the evenings to pass the time. Her father, the fiddler Alyre Gallant, noted her aptitude at a young age and jigged tunes to her until she found them on the fiddle. She was one of the last fiddlers with a traditional Island style to develop in Prince County, and has an extremely independent attitude towards developing and maintaining her own tune versions, or twists.Arsenault, Louise - Musical evenings at home
Read transcriptFather’s encouragement
Read transcriptSticks to the way she learned
Read transcript

Fiddling females were still very much a curiosity in the Evangeline Coast region during Louise’s childhood, despite the substantial precedent that had been set there decades earlier by Zélie-Anne Arsenault Poirier and her sisters. This was very much a mixed blessing. On the plus side, her talents were much in demand for community events. Once she reached adolescence, however, pressures to quit were strong enough that she felt she needed to put the instrument aside for a while.

When I first recorded her in 1992, Louise was a powerful dance fiddler who was also a mainstay at Acadian Festivals and a regular performer at La Cuisine à Mémé (Granny's Kitchen), a dinner theatre production based in Mont Carmel. From this production grew the band Barachois, which toured widely throughout North America, Britain and Western Europe, and enabled Louise to support herself as a professional musician for nearly a decade.

With Barachois in the past and a new band brewing, Louise’s energies have focused on the preservation of Acadian music through teaching and serving as a band coach; in 2006 she had a long range plan to found a fiddle-teaching camp on the Evangeline Coast.Arsenault, Louise - Preserving Acadian musical style
Read transcript