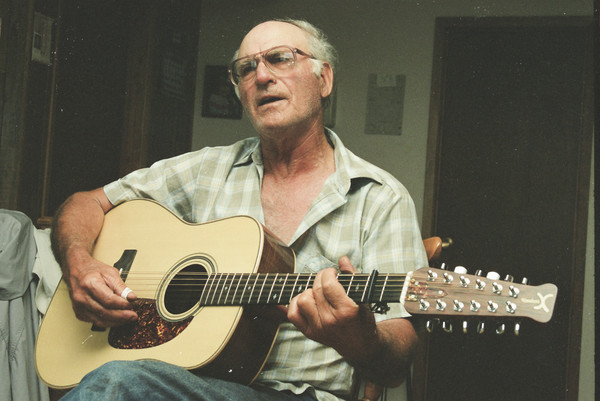 By the early 1990s, nearly all the vocal music heard at Island concerts consisted of songs borrowed from the country and western genre. Clifford Wedge was one of the last Islanders who still performed local songs from the pre-radio era. “The beauty of the old Island songs and the stories to them, “ he lamented, “that's what I figure they're missing. The songs shouldn't be forgotten, but the younger people don't go for them today.”

Clifford Wedge’s father John Wedge was a very fine singer; he worked in the lumber woods during the winter and each year he brought home new songs that he had learned from fellow lumbermen. People in the community took turns hosting house parties where people sang these songs, listened to the fiddle, and danced. Some of the fiddlers who played at these events were Gil Provost, Elmer Provost, and Ray Jones (brother of Andrew Jones).Wedge, Clifford (vocal) - songs from the lumber woods
Read transcriptHouse parties around St. Edward
Read transcript

The people around St. Edwards also enjoyed jigging fiddle tunes. Children integrated jigging into their play activities; some local people were so adept at the art that they could effectively accompany square dances.Mouth music around St. Edwards
Read transcript

John Wedge’s generation sang unaccompanied, but Clifford developed the art of accompanying himself on guitar. He got his first guitar at age 10. His father declared that the children could gather up all the potatoes left on the field after the main picking was done, then sell them and keep the proceeds. All the brothers pooled their shares and bought a Pine Beach guitar from Eaton’s Catalog for seven dollars.

Once he learned to play, Wedge would often accompany fiddlers at local house parties. Then in the interludes between dances, he would sometimes accompany himself and sing old disaster ballads like Peter Emberly.

In the late 1980s, Wedge joined up with a number of other locals and formed the Fisherman’s Choir, which practiced weekly at the Alberton Fisheries and sang sea songs at benefit concerts, seniors' assisted living sites, and nursing homes. Among other part- and full time members were Joe Doucette, David Gaudet, and Dennis Pitre.