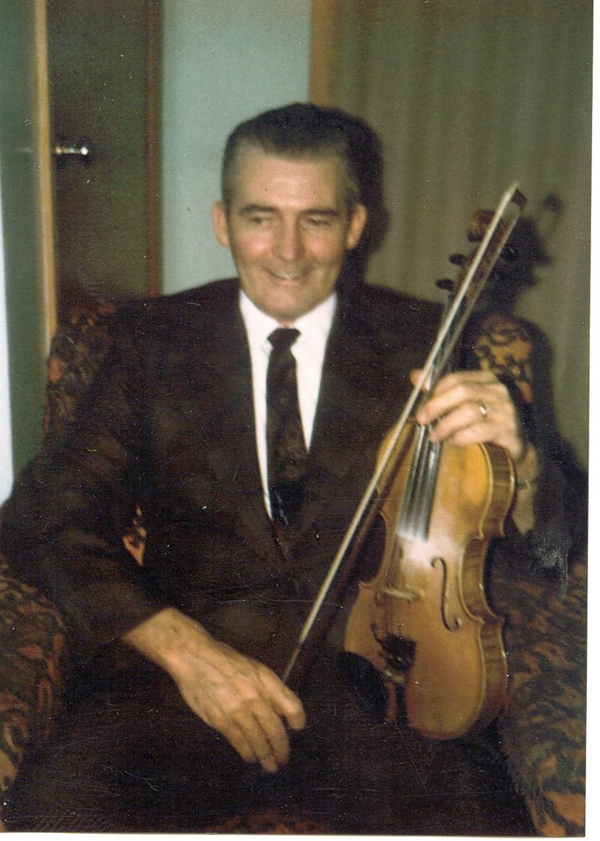 Music was deeply rooted in the Hughes family; Earl's father Daniel "DJ" Hughes and his mother, Mary both played the fiddle. Earl was the oldest of eight siblings, all of whom played one or more musical instruments; the family was well known throughout the community as a musical family. Earl’s brother, Emmett Hughes was also a fiddler and composer.

Earl learned to play the fiddle at a young age and was soon playing at community gatherings and dances.  When he returned home after the Second World War following service with the Canadian Army, he again assumed a highly active role as community fiddler. He played at many local events and weddings and regularly played at Millview Hall, Eldon Hall, the Mt. Stewart Legion, the Montague Legion, the Benevolent Irish Society (BIS) when it was on Grafton Street and the Knights of Columbus. He rarely declined a request to play his fiddle. Even after a typical forty to 60 sixty work week as local store owner - or later as a shipper with a Charlottetown wholesale company - it was not uncommon for him to play for a dance on Friday night, one or two weddings on Saturday afternoon and a dance Saturday night! His son Gary and daughter Joan accompanied him on guitar and piano, respectively at many of these events.

Sunday after Mass, was a time that Earl could relax, play his fiddle and learn new tunes. It was commonplace for other fiddlers to drop in at Earl's when they were out for a Sunday drive - with their fiddles in tow - often resulting in an impromptu afternoon of music. Other non-musicians would also drop in when they heard the fiddle music as they were driving by!

Earl particularly enjoyed the fiddle contest era and participated in many fiddling competitions. He would often place in one of the top three winning categories. He developed a love for Scottish tunes: particularly medleys of slow airs, strathspeys and reels. His fiddle style was smooth and melodious, a result of many hours of practice and dedication.

Throughout his fiddle career, Earl met and befriended many other fiddlers both on the Island and in Cape Breton. Winston "Scotty" Fitzgerald became a long time friend and they played together at many concerts and post concert house parties. Guitarist-vocalist John Allan Cameron was another touring musician who would often visit the Hughes home when performing on PEI.

When the Prince Edward Island Fiddlers Association was formed in 1975, Earl joined immediately and was an active member until the time of his death.

Earl’s son, Gary, and his grandson, Daniel, a left-handed fiddler who specializes in the Scottish and Cape Breton repertoire, have carried on the fiddling tradition and have performed at many ceilidhs and benefit concerts around PEI.  His daughter, Mary, sings and performs with a musical group of friends at ceilidhs and nursing homes and she is also learning to play the fiddle. Earl’s youngest son, Edwin, has a Bachelor of Music in classical guitar performance from Dalhousie University and is a former senior high school band/music director.

Biography by Joan Hughes; images and most of the audio files provided by the Hughes family.