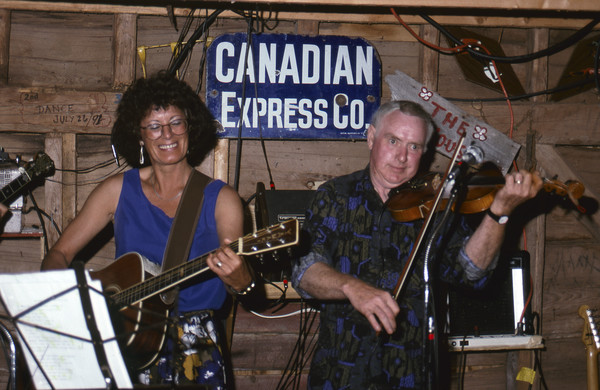 Leonard McDonald had Irish forbears on both sides of the family; the McDonald side came to PEI during the last third of the 19th century. He is the youngest of 14 children.

McDonald’s parents didn’t play instruments, but his mother often jigged tunes around the house (her favorite tune was Flowers of Edinburgh), and much of his early repertoire came from this source.

Leonard started playing fiddle at age 11. He learned by watching his two much older brothers Jimmy and Stephen play, and also by watching other fiddlers who played at community dances such as Raymond Gallant and Golden Graves. He also tried to learn tunes from radio, but was hampered by the fact that radios at that time were powered by expensive-to-recharge battery packs; listening time was therefore closely rationed. “ If you ever heard a tune that you liked, well it might be six months before you heard it again.” When he could, he particularly enjoyed listening to Don Messer, and a group who played on Island radio called the Merry Makers, which featured fiddlers Al Dowling and Hélaire Gallant.

In the 1950s, Leonard was playing for house, parties, weddings and wedding showers within a seven or eight mile radius of home almost every night. Sometimes, this got to be tiresome.

If you went to one, how could you say no to the next fellow. That's the sort of thing you got into. You felt obliged; if you went to this fellow over here, then this fellow down here, his daugh​ter was getting married next week and he's gonna have a shower and a wedding. “You played at his house, how come won't you play at mine?” I mean that don't work. You know them all, they’re all your neighbors.

He gave up dance playing for about a decade when he first got married (to guitarist Clara Arsenault McDonald). Then in the 1970s and early 80s he was back at it again, playing for town days, benefit concerts, and commercial square dances at both the New Haven Legion and at an amusement park in Cavendish called Marco Polo Land. He put an end to this hectic schedule in 1983, but for years thereafter he played regularly for informal dance parties in Kellys Cross, the Island community where his ancestors first settled.