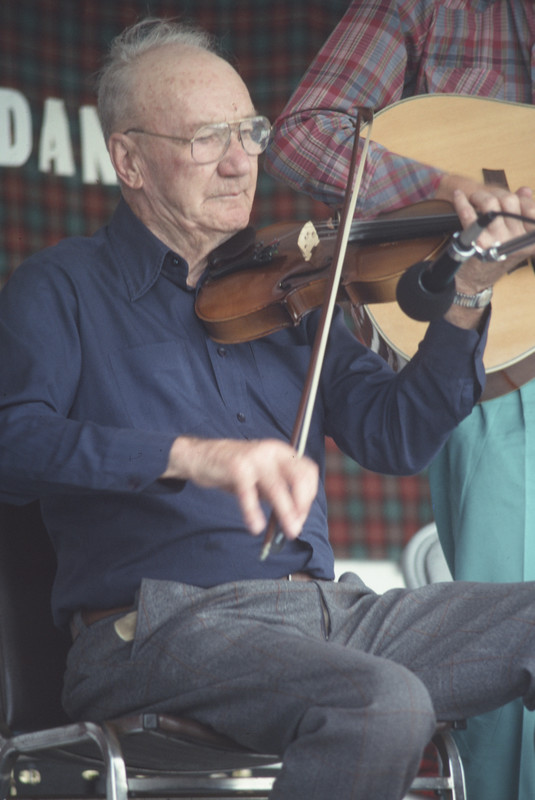 Elmer Robinson came from a major fiddling family. On his mother’s side, he was a nephew of William Harvey, who placed second to Neil Cheverie in the Great Fiddle Contest of 1926. On the paternal side, Elmer’s father and two uncles were good fiddle players.Robinson’s fiddling pedigree
Read transcriptFiddling in the family
Read transcript

Elmer started out on harmonica, organ, and piano, and didn't take up the fiddle in a serious way until his mid-20s. He developed quickly, however, and by the 1940s he was playing widely for house parties, hall dances, and weddings throughout an area bordered by Grand River on the east, Wellington on the South, and O’Leary on the west. According to such fiddlers as Jackie Biggar, Jim MacDougall, and Ervin Rafferty, Robinson was probably the most popular dance fiddler in west-central Prince County for more than three decades. He was also the most admired and widely emulated fiddler in the region for many years.

Elmer had a very lively, syncopated style of bowing and created interesting and unusual twists on such common Island tunes as St. Anne's Reel and Mrs. McLeod of Rasay. He won first prize so often at the PEI Fiddling Championships in nearby Tyne Valley that he was ultimately asked to retire from competition and become one of the judges.

Strings teacher Peter Robinson is a distant relative of Elmer’s.

During his 1992 recording session, Elmer invited three of his fiddling friends to come by and join the proceedings: Eddy Arsenault of St. Chrysostom, Frank O'Connor of Kildare Capes, and Warren Leard of Coleman. This made not only for a very festive occassion, but allowed us to record some great group fiddling. Some group fiddling recordings made from that session appear below under the heading, "Tunes from the Robinson Gathering."