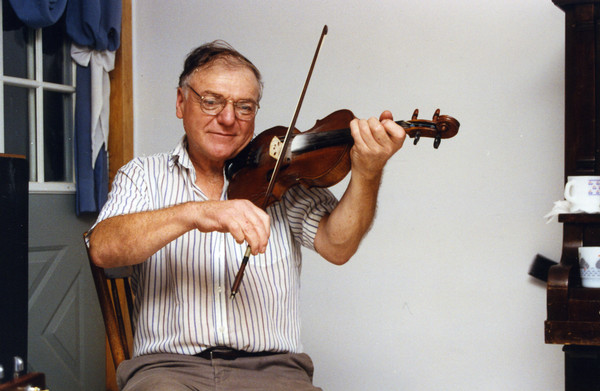 Dennis Pitre is one of the most prominent exponents of the West Prince fiddling style. His playing is lyrical and lively; so energetic in fact that his bow often seems in immanent danger of flying out of his hand (“Putting all jokes aside,” his long-time accompanist Vincent Doucette asserts, “the best fiddler this end of the Island from Egmont Bay down to the North Cape is this feller right here”). He has several cuts on the Rounder CD, The Prince Edward Island Style of Fiddling: Fiddlers of Western PEI.

Pitre grew up in the horse and buggy days. There was music all around him in the community – and he very much enjoyed listening to such local fiddlers as Ralph and Walter Arsenault, Andrew Jones, and Adrian Richard – but there was very little at home. At about age 12 he resolved to get hold of a fiddle, and found one for sale for $20. To raise the money he spent months gathering up glass bottles, which could then be redeemed for one cent each (interestingly, later in life he would take over the local bottle redemption business).Pitre, Dennis - Pitre collects 2000 bottles
Read transcript

Dennis had no one handy to help him learn, so he had to be resourceful. He’d get one neighbor to help put the violin in tune; he would put his ear against the wall of another neighbor’s house in order to hear him playing. He spent long hours practicing upstairs during the summers, squawking with his bow and tapping his feet while his mother stoically worked in the kitchen directly underneath. The first tune he ever played was Cock of the North.A resourceful learner
Read transcriptMother puts up with his efforts
Read transcript

When Pitre was about 16, he started attending and playing at local square dances; he often came home whistling the tunes he had heard and would then try to find them on fiddle. He also learned tunes from the radio. Some of the fiddlers he most listened to were Don Messer, Ned Landry, and Cape Breton fiddlers such as Winston Fitzgerald and later, Jerry Holland.

The final piece of the puzzle was getting the proper tempo and rhythmic swing for Island dancing. This came mostly from watching and getting advice from local step-dancers, some of whom were great masters of the art.
Read transcript

One place that Pitre and Doucette would often encounter step-dancing was at the Harbor, when fisherman came home from work.Pitre, Dennis - Step-dancing at fishing harbor
Read transcript

Pitre has borrowed quite a number of tunes from the Cape Breton repertoire, such as King’s Reel, Anne Marie MacDonald's Jig, and Cape Breton Symphony's Welcome to the Shetlands. He has also adopted the practice of using Cape-Breton style cuts, or bowed triplets, but often places them at points of a tune where someone familiar with Cape Breton fiddling would not expect to hear them.

For many years, Dennis played in a band that provided the music for weekly dances at the Tignish Fire Hall. This program had always included at least a couple of old-time sets, but by 2006 interest in square dancing had clearly slacked off. When the band asked for a show of hands on whether to keep square-sets on the program, the crowd voted against it.Square dancing dropped in Tignish
Read transcript