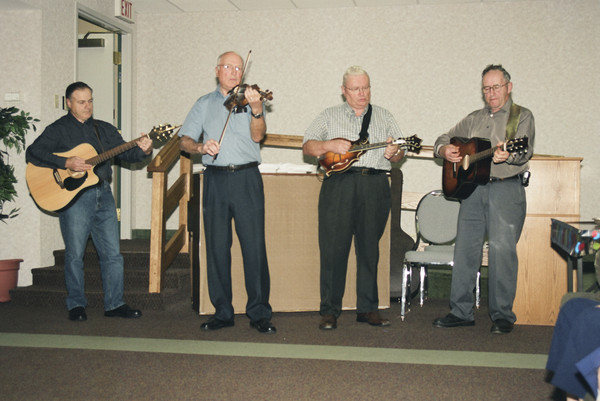 [Photo of Bud Stewart: Not Yet Available]

Bud Stewart did not play violin as a youngster and there was no fiddle music in the house, but his mother played pump organ and he got some training on that instrument. He was a great fan of Don Messer’s fiddling, which he heard on the family radio and wind-up phonograph. As a teenager he attended most of the dances in the surrounding area. Some of the fiddlers who played for those dances were John Dan MacPherson, Attwood O’Connor, Archie Stewart, and Jack Webster.
Read transcript

Bud left the Island in 1954 to seek his fortune in Ontario. When he was in his 40s, he took fiddle lessons from from Elizabeth Townsend, the wife of fiddler Graham Townsend. He continued learning tunes on his own from sheet music, and also participated in a number of Ontario fiddle clubs.

When he returned to live on PEI several years ago, he helped fill a void left by the near disappearance of older-generation traditional fiddlers from Central and Southern Kings County. A few accompanists coalesced around him - Urban Chaisson and John MacLeod on guitars and Ivan Nicholson on mandolin – and together they often played at local ceilidhs, benefit concerts, and seniors’ homes.

Video Selection: [Not Yet Available]