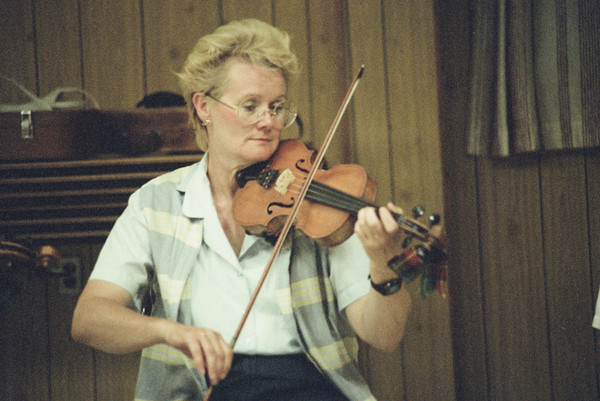 Libby Haywood Hubley grew up in a musical family in western Prince County and Charlottetown. When she was very small and her family was still living in Howlan, they held musical get togethers every Sunday evening. She started taking lessons in Highland Dancing at age 9 and studied for over a decade; in her 20s she moved off-Island and studied ballet, jazz-, and tap-dancing.

Upon returning to PEI in the mid-1970s, Hubley learned Island style step-dancing from Nancy Gallant Murphy. She decided to start teaching step-dancing on a systematic basis, and for several years she conducted classes in several communities around Prince County. In the mid-1980s, she built a small studio in Kensington and set up a permanent dance school there. A troupe made up of students from this school, known as the Lady Slipper Dancers, then began performing at festivals and concerts throughout the region.

Hubley was very much aware that the style of Island step dancing had changed after the introduction of formal instruction. She tells us that one of the big challenges she faced was finding a way to make Island step-dancing an effective performance medium.Step dancing in the old days
Read transcriptHubley, Libby (speech) - Taking step-dancing onto the stage
Read transcript

Shortly before this interview took place, Hubley was elected MLA (Member of the Legislative Assembly) for the District of Kensington-Malpeque. She was later appointed to represent the Maritimes Provinces in the Senate, Canada’s largely ceremonial upper house.