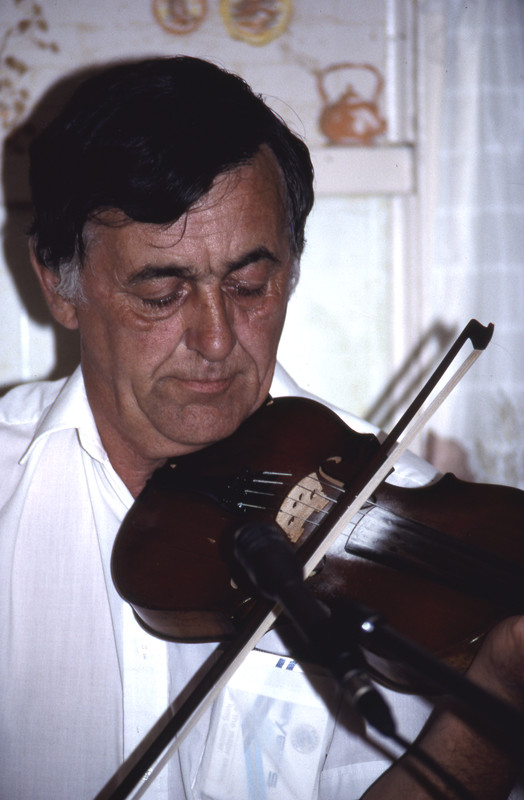 “Young Peter” Chaisson – so nicknamed to distinguish him from an uncle who lived across Bear River Road – was the eldest of the three brothers. He was an extremely strong player with a stately, ornate, and sensitive style. He often seemed intent on capturing and projecting every possible emotion and musical nuance from the tunes in his repertoire. His playing appears on the Rounder CD, The Prince Edward Island Style of Fiddling: Fiddlers of Eastern PEI, and also on a number of self produced CDs that have been released since the early 1990s, such as The Road to Rollo Bay (which also features the playing of his daughter, Melanie Chaisson).

Once Peter showed an interest as a youngster in playing fiddle, he found himself under a considerable pressure from his father to progress.

Some of the kids would be having a hockey game out in the back rink and I'd be looking out the window watching them playing hock​ey, trying to concentrate on practicing the tune. And you didn't leave the house and play hockey until you practiced that tune and knew it.

Peter took an extremely active role in promoting the Island’s Fiddling Revival. For many years, he oversaw the property on which the Rollo Bay Scottish Fiddling Festival is held, was in charge of Festival finances and logistics, and also managed the Rollo Bay Fiddle Instructional Program.

For well over three decades, Peter and his brother Kevin spent every Monday night from early fall through late spring assisting at the Rollo Bay Fiddle Instruction Program. For many years, Peter’s special job was to be on hand to demonstrate authentic performance style. Starting around 2003 and continuing until his death in 2015, he offically took over as instructor of the advanced class. He also started teaching lessons privately from out of his Bear River home.

As a teacher, Peter was known for being a stickler on using the priming technique, in which the 4th finger is used to double the sound of the open higher neighboring string. In his own playing, he favored a variant of the technique in which he comes into the doubled note via a slow grace (the tune used for illustration is Smith’s Reel).Demo: initiating priming via slow grace
Read transcript

In 1991, Peter and Kevin shared a family story about how their father and most of his brothers took up the fiddle despite paternal opposition. They also describe how a fiddler’s sound acts like an “accent” in language to help indicate a musician’s place of origin.
Read transcriptCan tell where they’re from via style
Read transcript