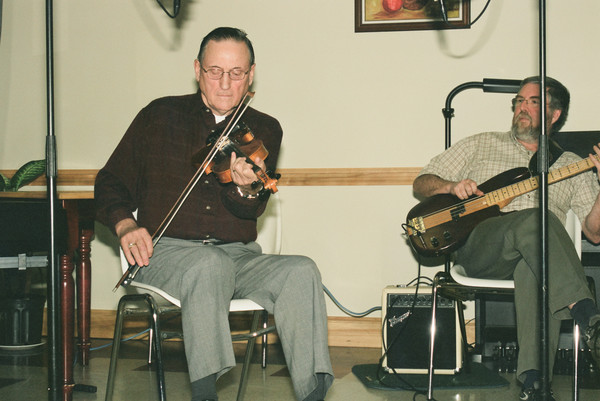 Jim MacDougall was one of the founders of the Prince County Fiddlers. By 2006, most of the other founders were gone from the scene, and Jim was in effect serving as unofficial leader by example. He has something of a dual musical personality. Essentially, he plays Cape Breton tunes in a quasi-Cape Breton style, and old Prince County tunes – such as Farmer’s Reel, Growling Old Man, Ottawa Valley Reel, and Twin Sisters – in classic West Prince Style.

MacDougall grew up in a musical family in Grand River. His father Edward MacDougall played fiddle, and it was at their house that many of the community house parties took place. As a youngster, Jim used to station himself as close as he could get to the music at house parties and parish picnics, because he found listening to well-played fiddle music so pleasurable.Parish picnics in Grand River
Read transcript

For outdoor dances, people around Grand River used to build platforms known as dancing booths (east of Charlottetown these structures were called dancing saloons). When Jim’s family held a wedding or wedding shower at their home, they borrowed a dancing booth from the church. During Jim’s youth the fiddler most in demand for playing at local weddings was Elmer Robinson.Wedding showers at home
Read transcript

Like many other Island players of his generation, Jim had to “sneak” his father’s fiddle in order to get hold of an instrument long enough to get started. He played his first dance at age 16, when locals in need of a fiddler came by in a horse and sleigh in the middle of the night and got him hauled out of bed.Sneaking the fiddle
Read transcriptPlays at first dance
Read transcript

At age 74, MacDougall still found fiddling and fiddle tunes new and fresh; he expects that attitude to persist as long as he does.He’ll always love fiddling
Read transcript