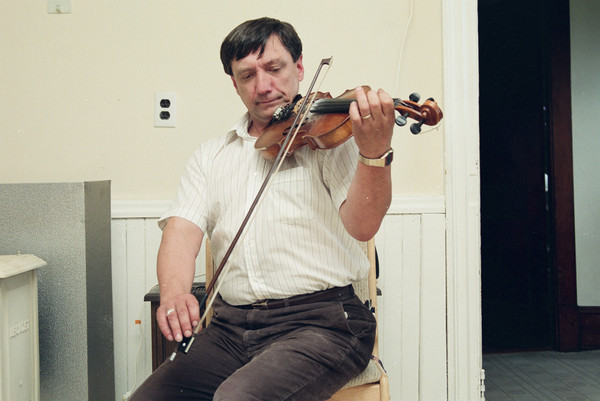 Robert Arsenault has become an important stage performer and music instructor on the Island scene. He plays and teaches both fiddle and fretted instruments: notably guitar and mandolin. He studied music at the Université de Moncton and classical guitar at St. Jacques in Montreal, and is highly articulate in two languages.

Robert is the grandson of noted Evangeline Coast fiddler Joe Bibienne Arsenault. Joe à Bibienne and several of his offspring were important dance fiddlers in their home region for decades. In fact, some of his daughters – including Zélie Anne Arsenault Poirier – were some of the very few female fiddlers to play regularly at local dances on PEI prior to the modern era. Thinking back on this heritage, Robert reflects on the emotional qualities that give rise to great dance players, and on how their music reflects the experience and aspirations of their communities.Joe Arsenault fiddling family
Read transcript
Read transcript

In the late 1990s, Arsenault quit his government job and started playing professionally and teaching music lessons full time. He now represents one of the first of a new breed: a musician who makes a living on PEI playing traditional music. He notes that the big change in traditional fiddle music in recent years is that it has moved out of the kitchen and onto the stage. He notes that the next generation of fiddlers will have learned to play via lessons, rather than by absorbing the music intergenerationally; he is concerned that although youngsters are playing more precisely and with more technique, they may never acquire the feeling and dance rhythms that make the music come alive. An occasional composer, his original tunes include the Crossroads, the Purple Parrot, and Queen of the Priming Machine. Arsenault, Robert - Professionalization of fiddling
Read transcriptArsenault, Robert - From dance fiddling to stage performance
Read transcriptNew generation of fiddlers
Read transcript