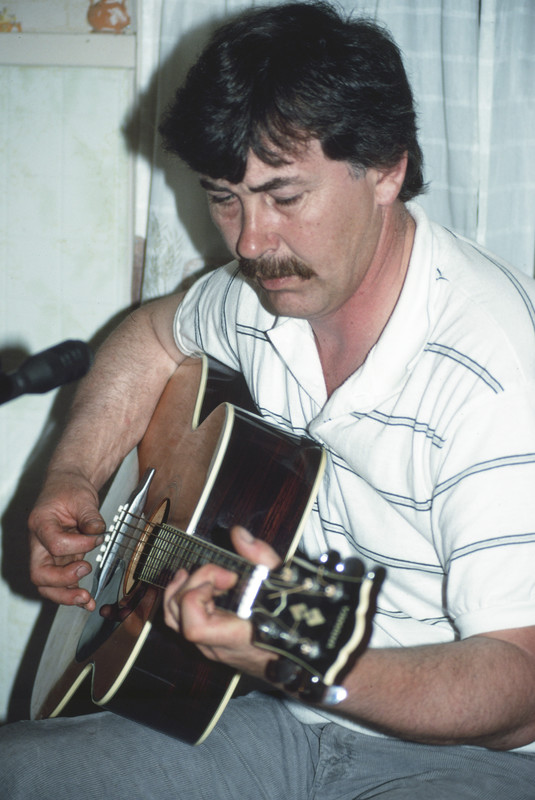 Kevin Chaisson resisted family pressure to take up fiddling during his youth and turned to the piano instead, becoming perhaps the strongest and most-in-demand piano accompanist for fiddle music on the Island. His accompaniment style – influenced by such Cape Breton pianists as Dougie MacPhee, Hilda Chiasson, and Joey Beaton – has been very widely emulated throughout the Island.

Kevin started on piano at about age 16, inspired by the music of a country music pianist Floyd Cramer. Once he had learned to play just a little, Kevin was pressed into service accompanying his brothers at family get-togethers and Sunday gatherings. The better he got, the more he was in demand: “Many's the night I sat at the piano for eight or nine hours straight: never even got off, ‘cause there was all kinds of fiddlers around and one piano player.” He also took up guitar so he’d be able to hold up his end of things on those occasions where no piano was available. In fact, Kevin played guitar accompaniment for his brother Peter’s 1991 sesssion.

Kevin did eventually take up the the fiddle in his late 20s, and he became an accomplished player on that instrument, as is evident from the selection available here. Old-timers said that of the three brothers, his style is actually closest to that of his father, Joe Pete.

In the late 1970s, Kevin and his brothers were drawn by Joe Pete into participating in the Island’s Fiddling Revival. Kevin gave generously of his time and energy in to both the Eastern Kings Fiddlers and the Rollo Bay Scottish Fiddle Festival. And for over 20 years, he spent every Monday night from early fall through late spring providing accompaniment and providing general assistnace at the Rollo Bay Fiddle Instruction Program. Kevin and his brother Peter often took ensembles of young fiddlers around to play at Island festivals and town days. These performances seemed to give older players hope that Island fiddling might survive, after all.Joe Pete’s central role
Read transcript

In 1992, there was still a question whether the youngsters recently introduced to the instrument would stick with it long enough to keep the art of fiddling alive. By 2006, it was clear that many of them had indeed kept playing, and that the revival had been a success. Not surprisingly, this was an outcome in which Kevin took great satisfaction.Hopes the music never dies
Read transcriptProgress report
Read transcript“We done it because we loved it”
Read transcript

Of special interest to piano players: Chaisson illustrates some of the strategies he uses to enhance his accompaniments (tune: Hamish the Carpenter; fiddler: Paul MacDonald).Demo: voice leading and bass lines
Read transcript