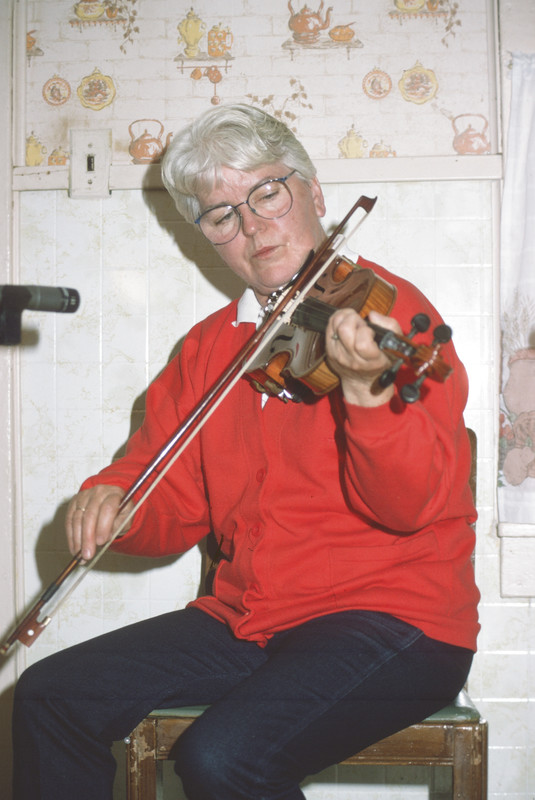 In the late 1980s and early 90s, Teresa MacPhee Wilson and her friend Jenny O’Hanley McQuaid performed around PEI as the popular comedy duo Bridget and Cecily, in which the two parodied contemporary Island life by assuming the viewpoint and mannerisms of old-fashioned country-women. In 1990 Wilson and McQuaid founded the Monticello Ceilidh – a weekly event featuring fiddling, singing, step-dancing, and square-dancing – that would serve as a prototype for literally hundreds of similar events around the Island.

Teresa grew up along the North Side of Kings County in an extended musical family. Her grandfather Roddy Joe MacPhee and her father Mal Roddy MacPhee were noted local fiddlers, her aunt Hilda MacPhee MacDonald was once one of the few woman in the region who played fiddle; her brother George MacPhee is one of the best Island fiddlers of his generation.

When Teresa was a girl, music was an every day aspect of North Side community life. Not only were there frequent house parties and other community dances, but neighbors of all ages often went about their days singing fiddle tunes using vocables or nonsense lyrics, an activity known as jigging or tuning. She offers two examples here: No Slippers On (to the tune of Paddy on the Turnpike) and Couldn’t Get Across (to the tune of Red-Haired Boy). Her mother often sang Gaelic Songs around the house.Wilson, Teresa MacPhee - Mouth music in the community
Read transcriptWilson, Teresa MacPhee - Gaelic singing at home
Read transcript

The children at Teresa’s schoolhouse always participated in an annual Christmas concert; on one fateful occasion her father came disguised as a fiddling Santa and nearly set himself ablaze when he brushed against a candle.Wilson, Teresa MacPhee - The fiddling Santa
Read transcript

Teresa was drawn to the fiddle while when quite young, but – like most girls of her generation – she was not encouraged to take up the instrument. Looking back on it years later, she now feels that both family and community steered her gently but firmly away from pursuing that particular musical path. In contrast, when she expressed interest in playing piano and guitar she got all the encouragement she could wish for. She devoted herself to those instruments, and before long she was providing accompaniment for her brothers Roddy and George at house parties and other dances around the North Side (Teresa plays guitar accompaniment for fiddler Marie MacIntyre; she accompanies herself on her own original song, Old Freight Train).Wilson, Teresa MacPhee - Community pressures against females fiddling
Read transcript

When attitudes about about women and fiddling changed on the Island in the 1980s as a result of the Fiddling Revival, Teresa began playing fiddle in earnest. Her interest grew increasingly serious through the 1990s and she has since composed a few original tunes, such as Family Ties and Maddy Brown’s Jig. .Wilson, Teresa MacPhee - Company discusses women and fiddling
Read transcript

In 2004, Teresa began meeting regularly for jam sessions and good fellowship with a number of other local women: among them are her sisters Gloria MacPhee MacInnis and Mary MacPhee Warren, the latter’s daughter Tracy Warren Burke, Anne MacPhee (daughter of Dan MacPhee), and Marie MacIntyre.

Tracy and Anne join Teresa on fiddle for Aunt Hilda’s Waltz, and the whole company offers their insights on the subject of women and fiddling.