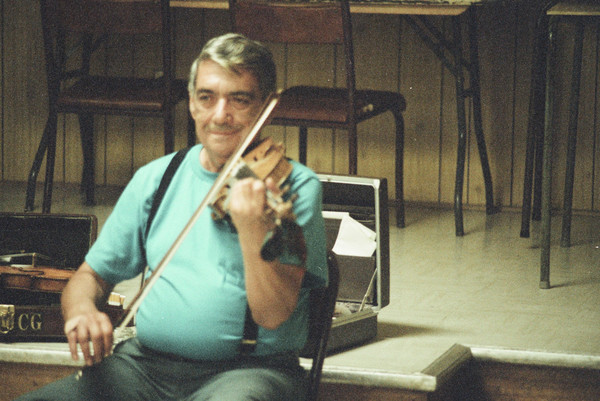 John Gauthier played a major role in the revival of Island fiddling, and served as head of the Prince County Fiddlers, a branch of the PEI Fiddlers’ Society, from its founding until 1993 when he moved back to his native Stanhope.

Gauthier grew up on a mixed farm on Covehead Bay, Stanhope, in a family of 12 children. Although none of his parents or grandparents played fiddle there was plenty of music around the home: particularly at milking time in the stable when family members would often break into three part vocal harmony. He had his first exposure to fiddling at frequent house parties held at his grandfather home, or at the homes of other community members.Dance parties in the community
Read transcript

John started fiddling as a young teenager in the early 1940s and picked up a lot of his early repertoire by ear from radio (because there was no electric power in his community, radios then had to be powered by large, expensive-to-recharge storage batteries). He notes that at that time country music broadcasts from WWVA, Wheeling West Virginia came in loud and clear on the north shore of Queens County, thereby explaining the presence of many American tunes in the local repertoire. He also taught himself to read music around this time, and thereafter sheet music served as his major tune source.Radio storage batteries
Read transcript

In the mid-1940s to supplement his income, John joined the Prince County Pioneers: one of the Island’s few touring dance bands. Although they all lived in Charlottetown, most of the halls they played were in the eastern two-thirds of Prince County: a circuit roughly comparable to the one frequented a few years earlier by fiddler Leo Farrell. By this time, conditions at some of these halls had deteriorated and fighting was endemic (one of the venues they played regularly was in fact nicknamed the Bucket of Blood).Prince County Pioneers play dance halls
Read transcript

In 1946, Gauthier and played three times a week on CFCY, then Charlottetown’s major radio station. In the late 1940s, he joined the Canadian Armed Forces and lived away from PEI for nearly 30 years. He returned in the late 1970s, and became deeply involved in helping both the Prince County Fiddlers and the PEI Fiddlers’ Society get off the ground.

Gauthier had been in declining health when his last interview took place in November 2006; sadly, he passed away just a few weeks afterwards. The voice of Gauthier’s accompanist Ivan Day is also heard on some of the oral history selections.

One more story: While fiddling at an Island wedding in the 1940s, Gauthier encounters an old-timer who insists that John’s sound evokes that of a long-dead relative.Great Uncle Charlie?
Read transcript