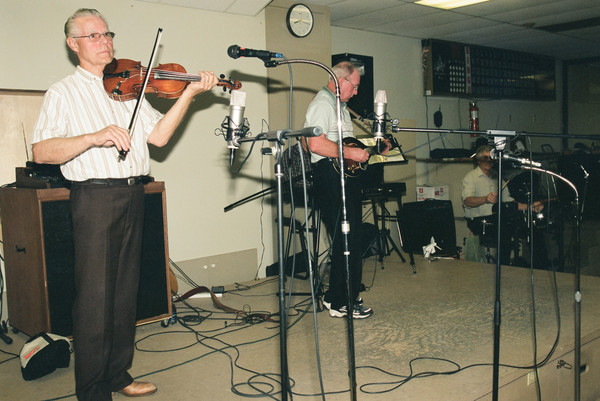 Herb MacDougall runs the Bingo Country Ceilidh (the rarely used official name of the event: Ceilidh Kitchen Party at Bingo Country). He also played fiddle and mandolin regularly for over twenty years on Bill's Country Jamboree, a local talent show run by Bill Acorn that ran for twenty-five years on Cable 10 Community Television. The selections featured here were recorded at the Ceilidh, where he was accompanied by that evening’s house band.

MacDougall grew up in a musical family. As a young child, when his family held house parties he would stand on the woodbox next to the kitchen stove: this raised him up just enough so he could look over the warming oven and watch his neighbors dancing. One day when he was 9 or 10 he found an old fiddle in pieces in the attic; his sustained efforts to put it back into working condition – and to figure out how to re-hair the bow – make for a terrific story.MacDougall, Herb - House parties in Bangor
Read transcript
Read transcript

MacDougall left Bangor at age 17 to go to business college in Charlottetown and remained there after college. He got away from the fiddle for quite a while, but took it up again in the mid-1970s.

Note to folklorists: All Bills Country Jamboree shows were video-taped, and there is probably a considerable amount of material on those hundreds of hours of recordings that should be preserved.