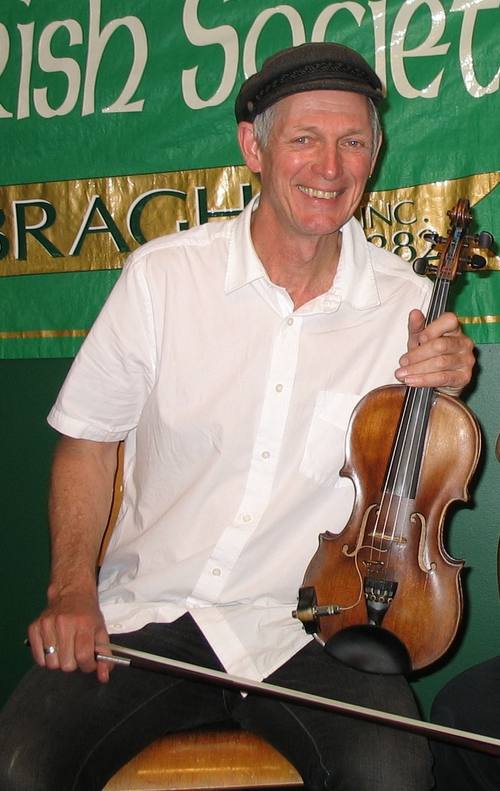 Roy Johnstone studied classical violin in his native Winnipeg, and for several years as a young man he participated avidly in the local folk-music scene. When he moved to PEI in the late 1970s, he brought with him an excellent technical background and a lively musical imagination. Once established on PEI, he absorbed tunes and influences from various available sources -- Acadian, Cape Breton, Irish -- but tied himself to no particular tradition. He joined the Queens County Fiddlers in its early days, and often spent time in the Evangeline Coast region of Prince County, where he was particularly taken with the then still vibrant Acadian house-party scene.House parties in the Evangeline
Read transcript

In the late 1970s, Roy became part of a small but highly active community of musicians and artisans who had migrated to PEI from other parts of Canada as part of a back to the land movement. From that time through well into the 1990s, musicians drawn from this group -- either as soloists, or as part of a continually shifting lineup of ensembles -- did much of the paid musical work available on the Island. Roy himself played for a while with well-known Canadian songwriter Lenny Gallant in a group called Speed the Plough (which also included Sigrid Rolfe, Marghie Carmichael, Chris Corrigan, and David "Papper" Papazian); he also played in several other groups including Flying Tide and Hold the Haggis. By the 1990s he making a full-time living from music, and is now one of the handfull of full-time musicians on PEI. In 2003, he was selected to represent the Island on the Isle of Skye at a series of concerts celebrating 200 years of Scottish settlement on PEI. He was also commissioned to compose a suite of tunes to mark the occasion; recordings of Roy playing these tunes -- The Parting, The Crossing, The Sighting, and The Welcome Dance -- are available on this site.

He has released several CDs of his own, including Rolling Waves, Stark Ravin', Devil's Jig, and Summertime.

Because Roy had so much public exposure, his polished and highly espressive style of stage performance has had a major influence on the performing styles of new-generation players. He predicts that Island fiddling will become much more eclectic in the future, as local players are exposed to and absorb a host of new influences.Johnstone, Roy - Influence on younger players
Read transcriptIsland fiddling will diversify
Read transcript

Of particular note: Johnstone’s exquisite renditions of the slow airs by Turlough O'Carolan, Captain O’Kane and Farewell to Music.