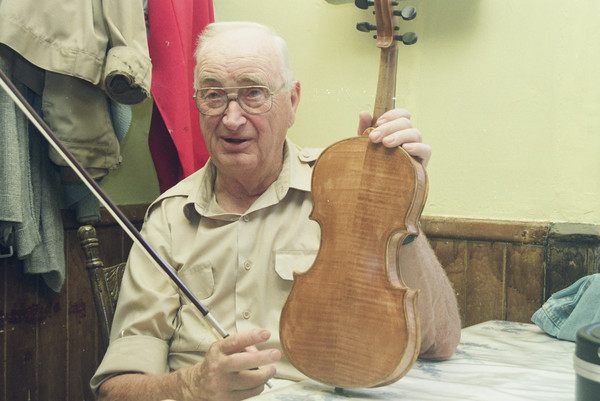 Joe MacDonald grew up in a house built in the 1830s by his maternal great-grandfather. His father’s forbears were among the Island’s first Scottish settlers who sailed on board The Alexander under Capt. John MacDonald and landed at Tracadie Bay in the 1770s.

Joe’s father was a great whistler who also played a bit of fiddle. Some other fiddlers in the family were his maternal grandfather Allan MacIntyre and an uncle, Jimmy MacIntyre. From listening to them and to a neighbor named Gregory MacEachern, he had quite a number of tunes committed to memory before he ever picked up the fiddle.Acquires his first tunes
Read transcript

Joe started playing at age 11 or 12. As he got older, he played frequently at house parties and dances within about a 10-mile radius of home, and at the local Parish Picnic. He also joined in at fiddlers’ gatherings held at the homes of several Mi'kmaq fiddlers who lived nearby. He was never paid at all for playing long hours but observed, “Oh it was all right. It didn't hurt me a bit. I wish I could do it now!”St. Andrews Parish Picnic
Read transcriptMacDonald, Joe - Mi’kmaq fiddlers nearby
Read transcript

Joe was greatly taken with Cape Breton fiddling when it first became available on radio. He taught himself to read music in the 1970s, and had learned quite a number of Cape Breton and old Scottish tunes via that medium.

MacDonald summed up what he liked about fiddle music.

It overrides every emotion in the world. It does away with sad​ness, it does away with – If you were mad and you listen to a good piece of music, the next thing you're in great humor! I think it overrides every emo​tion: fear and every​thing. That's the way it hits me, any​way. When I listen to some of those good players, I'm just in seventh heaven!