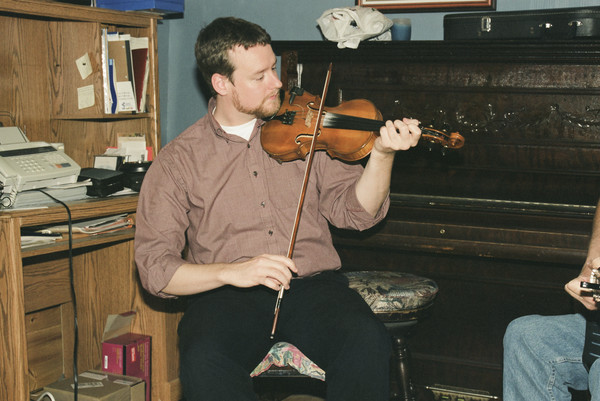 Ward MacDonald emerged as a player at the tail end of the first wave of new-generation fiddlers. His playing style can be described as more or less in the Cape Breton orbit; he travels to Cape Breton regularly, and he is accepted as a peer by younger-generation fiddlers there. He has composed a number of tunes that are now circulating widely – notably The Lion’s Den and December 2nd – and he teaches fiddle regularly at music camps in Canada and the US.

Ward is the scion of a prominent Island fiddling family. He father is Allan MacDonald: an enthusiastic participant in the Eastern Kings County Fiddlers. He also had two fiddling grandfathers: Hector MacDonald on the paternal side and Robert Crane of Riverton on the maternal. He was named for his maternal great grandfather: noted Central Kings fiddler Ward Crane. He learned his first tunes from his father, attended group classes in Montague taught by Paul MacDonald, then continued working on his own. In the early 2000s while still a student at University of Prince Edward Island in Charlottetown, he was appointed president and music director of the Queens County Fiddlers; he subsequently served two terms as president of the PEI Fiddlers' Society Executive Board.

Ward is a keen observer of the Island scene, and is very serious about helping traditional fiddling survive on PEI. He is pleased that in recent years fiddling has become a career path, which helps attract youngsters to the instrument. On the other hand, he is concerned that the proliferation of commercial ceilidhs may serve to dilute the music, and that the current state of affairs provides many incentives for youngsters to embark prematurely on performing careers.Fiddling becomes career path
Read transcriptRise and decline of ceilidhs
Read transcriptMacDonald, Ward - Perils of over exposure
Read transcript

In recent years, MacDonald been a major force behind the development of an Island-wide event called the Festival of Small Halls. Patterned on a Cape Breton event called Celtic Colours, the Festival is in essence a traveling variety show featuring traditional performers who appear in turn at venues scattered about the Island. He founded the Prince Edward Island Fiddle Camp, an annual week-long event devoted to instruction in Island traditional music.

Also a skilled piano accompanist in the Cape Breton Style, Ward plays piano in this project both for Allan MacDonald and Robert Crane.