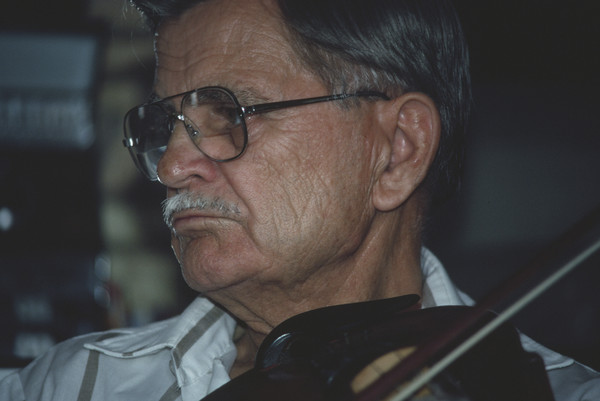 Toussaint Arsenault was a prominent Prince County fiddler, who grew up in Egmont Bay but spent most of his adult life in Summerside. He started playing fiddle at about age 12, and modeled his initial style on other fiddlers from the region, notably Joe Bibienne Arsenault, his daughter Zélie-Anne Arsenault and several of her fiddling sisters. In the 1930s and 40s, he played frequently at house parties and dances in the Evangeline region. Later on he became an avid competitor at local fiddle contests.

After the the Second World War, Toussaint developed a friendship with fellow fiddler Ervan Sonier that kept him musically active. He taught Sonier quite a number of tunes and helped him improve the efficiency of his bowing style. And after Sonier opened a barbershop, Toussaint would often drop by around closing time and the two would play till midnight.

Over the next few decades Sonier and Arsenault often performed together at local benefit concerts and other public events. Their music was often featured on the West Prince Party Line Show, and they helped found the Prince County Fiddlers. When Arsenault suffered a stroke in the late 1980s, he was only able to remember his tunes when Sonier came by for their weekly music session. We were lucky enough to record one of these sessions.

(Note:  all the selections here feature Toussaint Arsenault and Ervan Sonier playing together.)