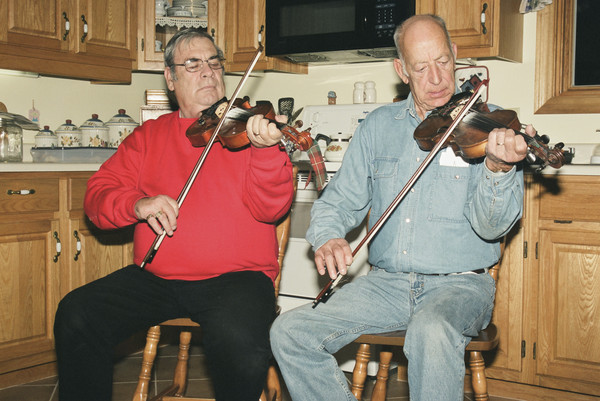 On his father’s side, Howard Hancock is descended from an American Sailor who jumped ship in Charlottetown, married a local woman, and made a life for himself on the Island. Howard grew up during PEI's traditional period, and often attended local house parties and other dances. Among his near neighbors during his youth were fiddler Elliott Wight and piano player Margaret Ross MacKinnon; fiddlers Danny MacLean, Clarence MacLean, and Jimmy Halliday lived just a few miles down the road.Grandfather comes to PEI
Read transcriptHouse parties around Belle River
Read transcript

Hancock played some fiddle when young, gave it up for decades, then came back to it quite late in life. Even so, his playing is fluid and retains an Island flavor. He has also begun composing tunes; two of them – Burnt Woods Breakdown and Harold's Tune – are available here.

The voices of accompanists Keith Nicholson and Norman Gillis contribute to the oral history selections.