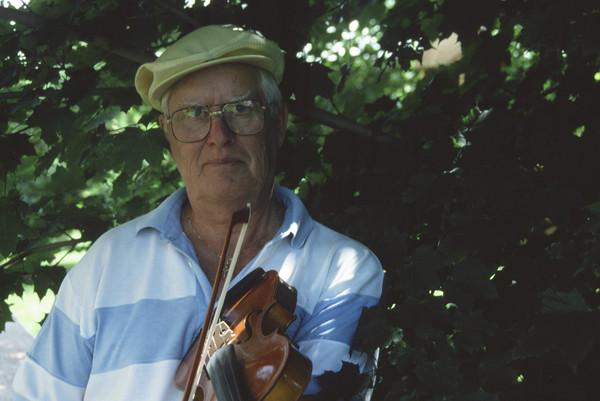 Hugh Gotell grew up with fiddling in the family. His grandfather Jack Gotell played, as did his father John Charles (b. 1893). When Hugh was young, his father didn’t own a fiddle of his own and had to borrow one in order to perform at the annual St. Patrick’s Day Concerts.

Hugh started playing at about 11, often using a makeshift bow that he carved himself from a scrap of wood and wound with white thread. He played on borrowed fiddles until he was 16; then his father bought him an instrument of his own through Eaton’s Catalog.Hugh Gotell gets started
Read transcript

Gotell learned his first tunes – such as St. Patrick's Day in the Morning and Wearin' of the Green – by watching his father’s fingers. After that, he added to his repertoire mostly by listening to fiddlers on radio; he also had the opportunity to hear and learn from numerous local players: notably Fred McCullough, George Boudreau, Jack Webster, and Hector MacDonald. When he learned a new tune, Gotell would often dress it up or otherwise change it to suit himself: a process that Islander’s call putting your twist on a tune.Play it your own way!
Read transcript

Hugh played frequently for dances and weddings for a few years, but then gave up playing regularly while serving in the military during World War II. He didn’t pick the fiddle up again on a consistent basis until the 1970s.

Another fiddler in the family is Hugh’s younger brother Wilfred Gotell.