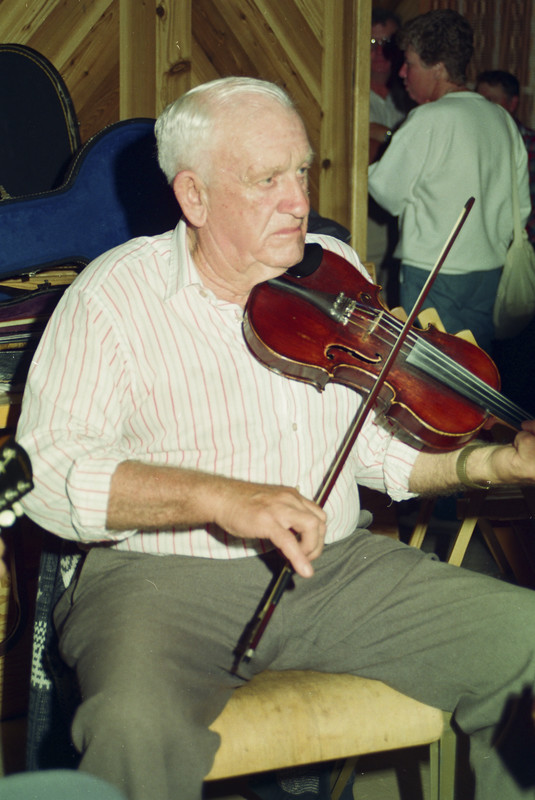 Cosmas Sigsworth at party in Kilmuir, 1992

Cosmas Sigsworth’s mother played the organ and sang, but there were no fiddlers in the family. There was plenty of great fiddling to be heard in the area, however, and he always longed to play. Some of the fiddlers he heard regularly at local dances were Ward Crane (father of Robert Crane), Hector MacDonald, and his personal favorite, Jack Webster: “He had great life to his music. If you were listen​ing to him, you would just get filled with life. He was a great lively player!”

When Cosmas finally got started on fiddle at age 12, his mother helped him learn his first tunes. She knew the tunes because she had grown up surrounded by fiddling neighbors. In later years he added to his repertoire by listening to broadcasts of Winston Fitzgerald and other Cape Breton fiddlers.His mother helps him learn
Read transcriptFiddlers on each side of the house
Read transcript

When Cosmas was about 18, he started playing regularly with his future wife, guitarist Rita Flynn. Together they often played for local house parties and other community dances. He describes the high energy atmosphere that characterized house parties during his youth, observing, “Those things went on. Sometimes it'd be getting quite bright when we were getting home.”House parties around Corraville
Read transcript

On Sunday evenings, Cosmas and Rita were often welcome guests at the Quinn household in Cardross, where they would play music for hours to an attentive audience.

Sigsworth never competed in fiddle contests himself, but he loved attending them: “I Just listened to every note: comparin’ with the next fellow’, pick out who you think is the best. You might not always right!”

Also a noted singer and gifted story teller, in later life Cosmas was often pressed into service to be master of ceremonies at local benefit concerts.