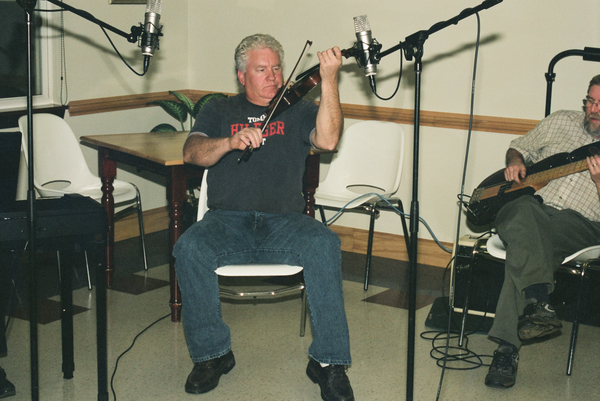 Jackie Biggar is one of the last fiddlers to have developed during PEI’s traditional period (two others are David Gaudet and Louise Arsenault). His father Johnny Biggar was an active fiddler who guarded his instrument closely, and Jackie had to be extremely persistent before he was allowed access to it. With some help from his mother, he quickly developed the ability to transfer music from his imagination to the instrument.Biggar, Jackie - Dreaming assists tune-learning
Read transcript

By the time Biggar was an adolescent much of the local fiddle-dance scene was gone from Tyne Valley. However, Jackie and his father often played at riotous music parties hosted by his uncle during the summers. As he recalls, there was always plenty of beer, a couple of quarts of ‘shine and buckets of lobster on the table, and dancers would swing at dizzying speeds to the music. He also competed – and frequently won prizes – at local fiddle contests, notably the PEI Fiddling Championships at Tyne Valley.Biggar, Jackie - Music parties in Tyne Valley
Read transcript

By the 1970s, Jackie was acutely aware of being virtually the only younger person then fiddling in public, and he watched with dismay as the local music and dance scene continued to decline.

Biggar is an extremely powerful player who is just as comfortable playing in the key of Bb as he is the more common fiddle keys of D or A (see for example his Mug `n’ Brush Medley). He was a great admirer of fiddler Elmer Robinson and learned a lot of Robinson’s tunes. He also is a big fan of Cape Breton playing, and picked up tunes from that repertoire – both directly from recordings, and indirectly from other local players such as Ervan Sonier and Jim MacDougall. He has adopted the practice of using Cape Breton style cuts, or bowed triplets from Cape Breton fiddlers, but often places them at points of a tune where someone familiar with Cape Breton fiddling would not expect to hear them. Biggar is very proud of his personal tune versions, or twists; and observes that one major source of validation for a fiddler is when other players adopt his twists.Biggar, Jackie - Others adopt your twist
Read transcript