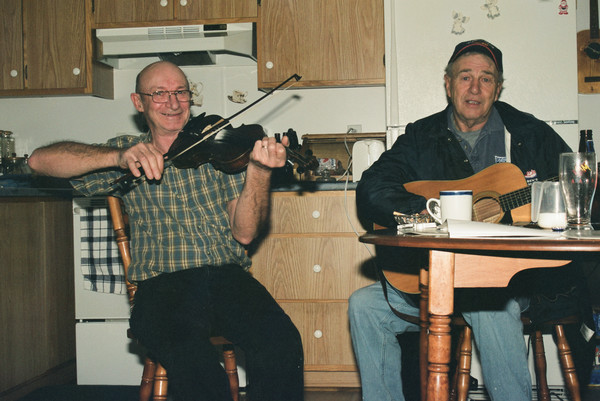 Bernard “Fenner” Myers was raised by his grandparents in a musical household in northern Queens County. His uncle Joe Myers played fiddle, and Paddy Gallant – a fiddler with roots in western Prince County – was a close friend of his grandfather and a frequent visitor. Although dances were still held at the time in local halls, Myers had the distinct sense when he was growing up that his family represented the last bastion for traditional music and dance in the immediate area. In the early 1950s, for example, he was the only youngster he knew of who was learning to fiddle, and the only members of the community he can remember step-dancing were members of his own family.

Myers himself may not have have taken up the instrument if he hadn’t been stricken with pneumonia as a child and confined to bed for a long convalescence. As his condition improved he naturally grew quite bored and his grandmother – searching around for something he could do – brought up his uncle’s fiddle for him to try. He picked out a couple of tunes and was hooked. Before long, he was playing regularly for dances at Covehead Hall.Myers Gets started
Read transcript

Myers left PEI for Ontario in the mid-1950s in search of employment opportunities, and he lived away from the Island much of the time for the next thirty years. Upon his return, his early musical interests rekindled. In the early 2000s, he met weekly with a group of musicians that played for seniors in nearby Brackley, and had occasional sessions with guitarist Jim Dobson and other musical acquaintances.

Fenner had something of a dual musical personality. When he played the tunes he had known since childhood, such as Pride of the Ball and St. Anne's Reel, he had a traditional Island sound. On some other numbers (for example, Stone’s Rag) his exposure via the airwaves to Southern-US fiddling and other mainstream North American styles was evident.