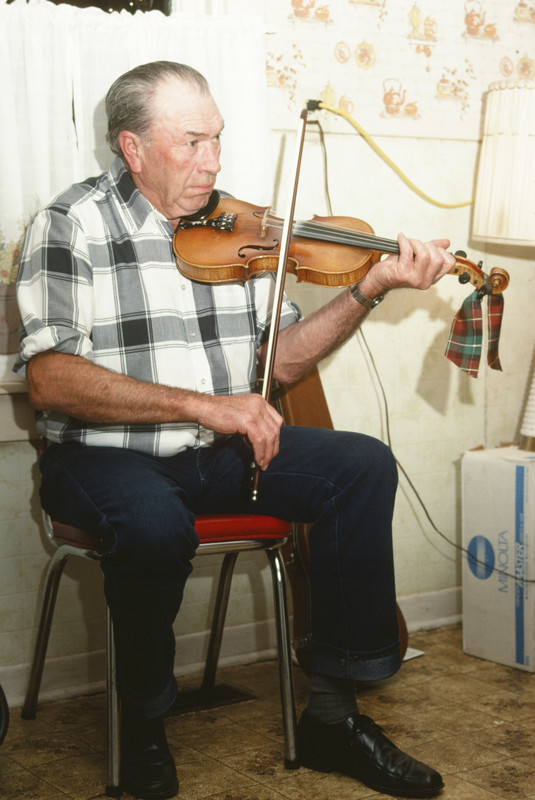 Hughie McPhee’s family has occupied the same property on the north shore of Northeast Kings County since the late 18th century. His father John J. McPhee was a noted local fiddler. Hughie learned a few tunes on fiddle as a young​ster, but he played mostly guitar until his mid-20s. His parish was hoping to raise money for a new church with a series of benefit dances, but no one in the area was available to play fiddle for them. They asked him to see if he could fill the role. He picked up the instrument again, and found that all the tunes he had heard around the house as a child were instantly available to him. In the late 1970s, both he and his brother Dan were founding members of the Eastern Kings Fiddlers. Since then, most of the new tunes he has learned have emanated from Cape Breton. He had not been playing regularly in the few years prior to the 2006 interview.McPhees Immigrate to PEI
Read transcriptHow McPhee got started
Read transcript

McPhee has great stories to tell about many of the tunes in his repertoire. Christy Campbell and the PEI Wedding Reel, for example, were once used in tandem to accompany a special dance that opened Island Wedding festivities. And Toganny’s Reel is said to have come to the North Side in the late 18th century via the intercession of a water sprite.
Read transcript

- McPhee had little use for contests, and even less for contest judges.Unqualified Contest Judges
Read transcript