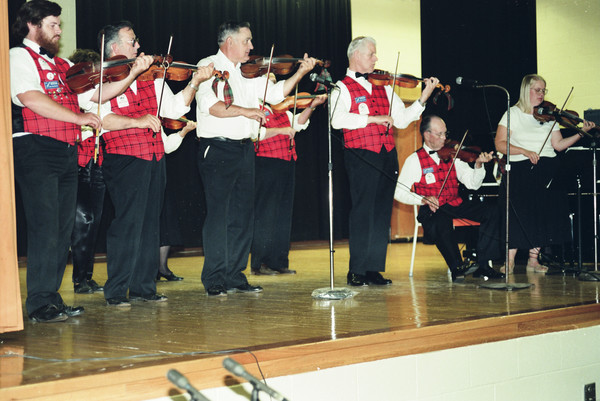 Kathryn Dau Schmidt grew up in the American midwest, lived for a few years in Saskatchewan, then in the late 1970s at the age of about 23 she re-settled to northern Queens County. She was immediately attracted to Island fiddling as “the real music of the people,” and joined the Queens County Fiddlers, a branch of the newly formed PEI Fiddlers’ Society. Dau Schmidt had received some classical violin training as a child, and had a systematic turn of mind, so when the idea was put forward that perhaps the Society might offer fiddle lessons to youngsters and other would-be players, she found herself to be just about the only one on the scene who was willing and able to take on the task. And when the Chaissons founded a free weekly fiddle instruction program at the Rollo Bay Elementary School, paid for by proceeds from the Rollo Bay Scottish fiddle festival, her experience teaching for the Queens County branch made her a natural choice for the Rollo Bay job. In 2006, she was into her 28th season of teaching at Rollo Bay.

Dau Schmidt’s method is to teach rudiments of technique and note reading, and then to drill on simple song melodies or tunes from the fiddle repertoire. Acknowledging that she is a classical player and no “fiddler,” she does not concern herself with the fine points of style. As expressed in 1992, her sense was that the students would be exposed to traditional fiddling styles at home, and that once they had the techniques to play, the styles of their home areas would assert themselves naturally. In other words she saw her role as getting people started, and at this task she has done admirably. Between the Rollo Bay Pogram and others she has taught around the Island, she is responsible for imparting the basics to many of the current crop of young fiddle performers on the Island, including JJ Chaisson, Timothy Chaisson, Sheila MacKenzie, and Cynthia MacLeod.Dau-Schmidt, Kathryn (speech) - Teaching methods at Rollo Bay Program
Read transcript

Dau Schmidt also felt strongly that if she and other Island teachers could get a large number of modestly talented individuals playing, in the future they might well serve as a core audience for the Island’s elite fiddlers.Maintaining audience for Island fiddling
Read transcript

Comparing Kathryn’s responses from the1992 and 2006 interviews offers some excellent perspective on the progress of the Island’s Fiddling Revival. In 1992, for example, she was deeply concerned about the effects of negative peer pressure on gifted young fiddlers. By 2006, peer pressure no longer seemed the threat it once was. Taking its place as a source of worry, however, was creeping commercialism, which was threatening to turn Island music and dance into something merely to trot out every so often for the tourists.Pressures on young fiddlers to quit
Read transcriptDefusing peer pressure
Read transcriptThreat of commercialism to tradition
Read transcript