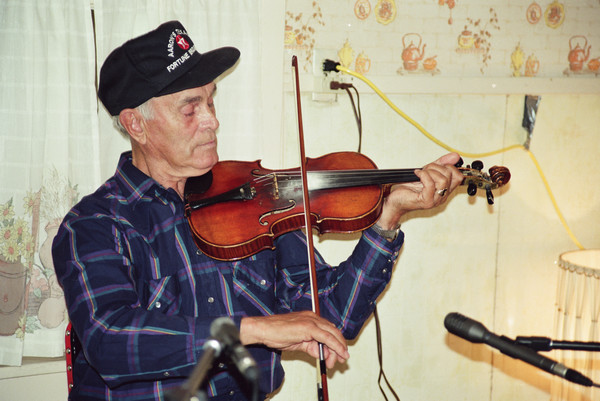 Gus started playing fiddle at 8, and was playing for dances by his mid-teens. Over the years, he played for house parties, weddings, and schoolhouse dances throughout northeastern Kings County.

All those little one room schools with the windows on the south side, they used to hold socials there to raise up some money to keep the school goin’. In them days you might get 50¢ or a dollar for the night. I always got taken in with that; they'd make for me the first thing. They kind of kept me going pretty steady!

He recalls that the two most popular social dances at the time were the quadrille and the eight-hand reel.

In his day Longaphie was also a champion step-dancer, and won prizes at contests held across the eastern half of the Island from Charlottetown to Souris. His favorite tune to dance to was Lord MacDonald’s Reel.

Longaphie first became acquainted with the Cape Breton fiddle repertoire in the 1970s through the Rollo Bay Scottish Fiddle Festival. He soon amassed a collection of LPs and cassettes and started systematically assimilating a new repertoire by ear.

If I buy a tape and play it a couple of times in the evening, I'll be no better off when the tape stops than I was when it started. But it just hits me over​night. I've seen myself getting up at half past three and four o'clock in the morning taking the fiddle and going over a number. I don't know if I dreamt about it or if it shot through my mind. But if I didn't pick the fiddle up then, I'd miss it.

Gus passed on the art of fiddling to his son, Buddy Longaphie.