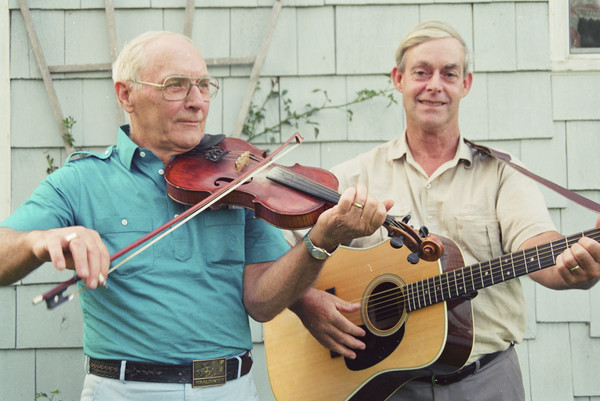 Attwood O'Connor grew up during the “Hungry Thirties” on a mixed farm in south-central Kings County. Nearly everyone on both sides of his extended family played an instrument. Both grandfathers played fiddle, as did his father Phillip O’Connor, his three maternal uncles Cliff, George, and Oliver Kemp, his two brothers Arnold and Melville, and his sister Elsie. Attwood’s home was the usual place that locals would congregate when they wanted to hear music. His parents often hosted a couple of house parties per week, and in an average week one or two other households in the community would also host house parties.Mixed farming around Milltown Cross
Read transcriptThe musical O’Connor household
Read transcript

Attwood started fiddling at age 7. His father showed him how to hold the bow and explained to him that his biggest problem would be to synchromize the movement of bow and fingers: “I'd get my fingers going the bow would stop; I'd get the bow going and my fingers would stop. Well, it took awhile, but I finally mastered it.” At first, his left hand couldn’t quite reach the fingerboard with the fiddle braced under his chin, so in order to play he had to drape the body of the instrument across his shoulder.

O’Connor accompanied his first dance at about age 11, and for the next half century he played widely for dances throughout Southern Kings County. During the summertime, sometimes he’d play at house parties and hall dances as often as 4-5 nights a week. He also often played at local weddings, which would tend to start in early evening and go through the night.Old-time weddings near Milltown Cross
Read transcript

Attwood recalls that fisticuffs and other forms of violence were endemic at Island dances and events, but that no matter how bad things got people generally took special care to avoid harming the fiddler or his instrument.
Read transcript

At first, O’Connor’s usual accompanist was his brother Emmerson, who played guitar. About 1950, he started playing regularly with Mac MacKinnon. Stanley Bruce joined them about ten years later, and the resulting trio played widely for local dances and benefit concerts until well into the 1990s (for a while, they named themselves the Buffalo Boys after the a nearby attraction called the Buffalo Ranch).

By 2006, O’Connor was one of the last active traditional fiddlers in the southern half of Kings County, and may well have been the last living exponent of the old Southern Kings style. At the time, he still played occasionally at benefit concerts and ceilidhs, but – with MacKinnon passed on and Bruce not musically active – he no longer worked with regular accompanists.