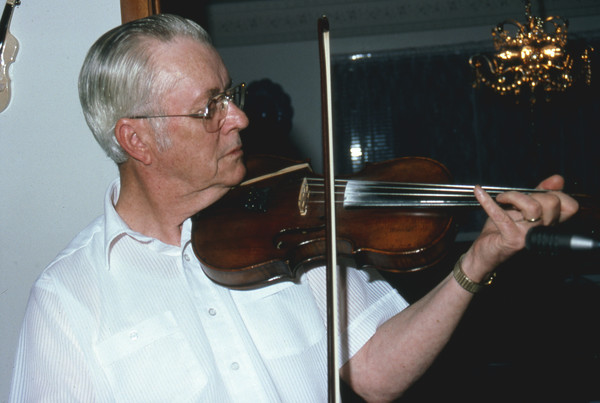 Wilfred Gotell in effect inherited both his occupation and mantle as community fiddler from his father John Charles, who once played for most of the house parties, hall dances, and weddings within a 6-7 mile radius of Georgetown.

When Wilfred was about 5, his father used to chip toy fiddles for him out of cedar shingles, and wrap them around with white thread to simulate strings. He started playing on a full-fledged instrument at about age 10, and played for his first dance at age 12. For the next few decades, Gotell played regularly at houseparties, community dances, and benefit concerts. Because neighbors looking to dance or listen to him play dropped by so often, his home became known as the "halfway house."“Let’s go to Wilfred’s”
Read transcript

In the late 1940s, Gotell joined up with fellow Georgetown fiddler Fred McCullough, and for several years the two of them played for dances around Central Kings County three or four nights a week. They later joined together with a few local accompanists to form the Holy Name Orchestra, and played for many years at box socials and other benefit events held at the Georgetown Catholic Church.

Upon one occasion, Gotell, McCullough, and some other friends were hired to played for a dance in Murray Harbour; when the dance was over they were offered some very unusual payment in kind.Band paid in ducks, not bucks.
Read transcript

Wilfred played with a sweet, straight-forward style, and his repertoire featured both Cape Breton and Island tunes. He very much enjoyed participating in fiddle contests, and in 1967 after a playoff in Charlottetown among 19 local contest winners, he was declared fiddle champion of the Island.

Gotell very much enjoyed the old Island way of life. He regretted that step-dancers had become less subtle and skilled, and that his neighbors no longer knew how to properly dance the Lancers. Above all, he lamented the decline of sociability and interdependence among neighbors.Decline in Square Dancing
Read transcriptPeople are not nearly so neighborly
Read transcript

Another fiddler in Wilfred’s immediate family is his brother, Hugh Gotell.