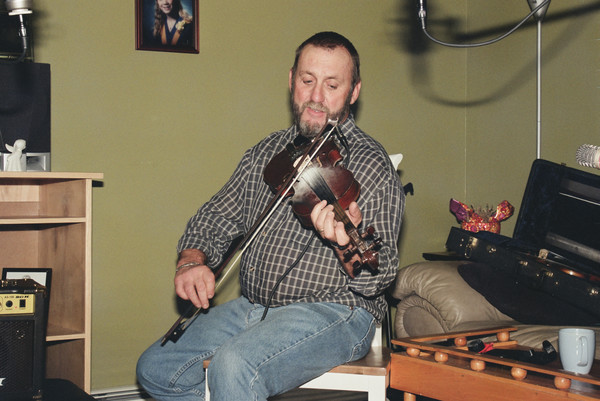 David Gaudet is one of the last fiddlers to develop during PEI's traditional period (some others include Louise Gallant Arsenault, Jackie Biggar and Victor Doucette). He has a vigorous, authentic West Prince sound, and a prodigious repertoire which includes quite a number of tunes that seem to have otherwise fallen out of local circulation.

David grew up in a fiddling family and learned quite a bit in terms of both style and repertoire from his uncle Emil Gaudet. Upon occasion, an older brother helped matters along by sending David upstairs with the fiddle and not letting him come back down until he had learned the tune he was working on.Family helps him get underway
Read transcript

When Gaudet started out, his arms were too short to reach the instrument when held under the chin. Consequently, for the first few years he played holding the fiddle like a guitar with its edge on his right thigh. “When my arm got longer, the fiddle come up to the chin. Nowadays they buy the fiddle to suit you, for the kids. Them days you had to play what you had.”

David went to many local house parties with his parents and learned new tunes by listening to other fiddlers. “All the tunes that was played, they went in the ear, and when I got home I scratched on the fiddle till I come up with something. Right now I can still pick up a tune and learn it pretty quick if I want to put my mind to it.”

He had just come into his own musically when PEI began to modernize, local tastes changed and the local fiddle and dance scenes started to decline. His own generation showed little interest in fiddle music and Gaudet virtually stopped playing in public. Then the Fiddling Revival came, bringing a rekindling of interest. He now plays out frequently with Cecil Arsenault on guitar and Robert Gallant on piano. The three of them particularly enjoy attending some of the bluegrass festivals that have cropped up recently on their end of the Island, and have started learning tunes from fellow musicians at these events. Gaudet often then takes these tunes and translates them quite handily to the West Prince playing style.Young people lose interest
Read transcript