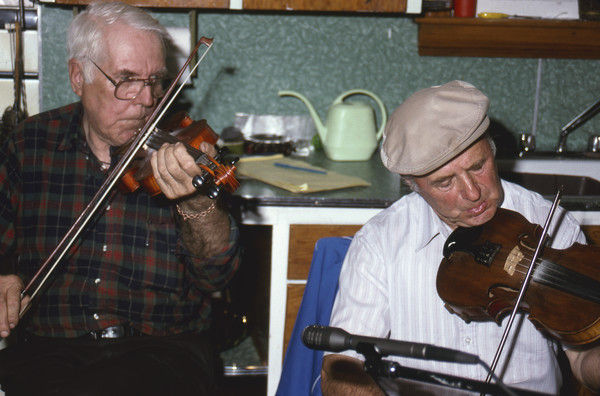 Frank O’Connor grew up in a family of ten children, all of whom played music. Since all they had was a harmonica, a pump organ, and one fiddle, getting hold of an instrument for any length of time required a bit of ingenuity.O'Connor, Frank - Strategies for getting hold of the fiddle
Read transcript

When Frank was young, house parties and schoolhouse dances around home were commonplace.

There was always three or four fiddlers in the neighborhood, and if it was in the winter time you'd hear a set of sleigh bells jingling; you'd look out through the window and here comes such and such a fellow. Well he had his fiddle with him and then we're in for a night of music: pull the kitchen table back, pull all the chairs, pile them up somewhere in the corner, and everybody would take a partner and away they'd go. Then we played in the schools. Years ago part of the teacher's salary was paid by the people in the district, and you had to have parties in the school to raise the money to pay the teacher. And of course those were the big times in the district!

O’Connor left PEI as a young adult to pursue work opportunities in Ontario and New Brunswick, and gave up fiddle playing for about thirty years. When he eventually returned to it, he found that favorite source for new tunes was recordings by Winston Fitzgerald and other Cape Breton fiddlers. He returned to Kildare Capes in the mid-1980s, and began practicing regularly with the West Prince Fiddlers.

In July 1992, Elmer Robinson invited Frank and two other fiddling friends -- Eddy Arsenault of St. Chrysostom and Warren Leard of Coleman -- to join in during his recording session. This made not only for a very festive occassion, but allowed us to record some great group fiddling. Some group fiddling recordings made from that session appear below under the heading, "Tunes from the Robinson Gathering."