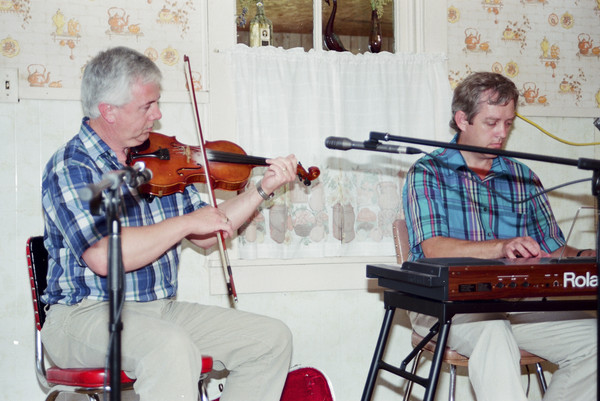 Sterling Baker and pianist Doug Matheson served as the house band for many years at the Orwell Ceilidh. His style can be described as an exceptionally clean and tasteful blend of Central Kings and Cape Breton fiddling.

Although there were no fiddlers in the family (his father played harmonica and a brother played guitar), Baker felt strongly attracted to fiddle music from a very young age. He recalls that at age 13 when he attended a square dance, “I’d go and sit on the corner of the stage and listen to the fiddler all night. I would not move: scared I'd miss something.” He particularly enjoyed listening to such local fiddlers as Hector MacDonald, Francis MacDonald, and Omar Cheverie, and to radio CJFX from Antigonish, Nova Scotia, where he could hear such well-known Cape Breton fiddlers as Winston Fitzgerald, Angus Chisholm, and Bill Lamey.

Sterling soon took up the guitar in his mid-teens and learned to accompany fiddle tunes. For a few years following the end of high school, he often provided accompaniment for fiddler Francis MacDonald; together they played at numerous hall dances and schoolhouse dances throughout northern Kings County.

Baker moved to Ontario for a few years during the 1960s in search of work opportunities. During one visit home, Hector MacDonald gave him an old fiddle that had fallen to pieces. Sterling had a friend of his put the instrument back into working order, and he’s been fiddling ever since.