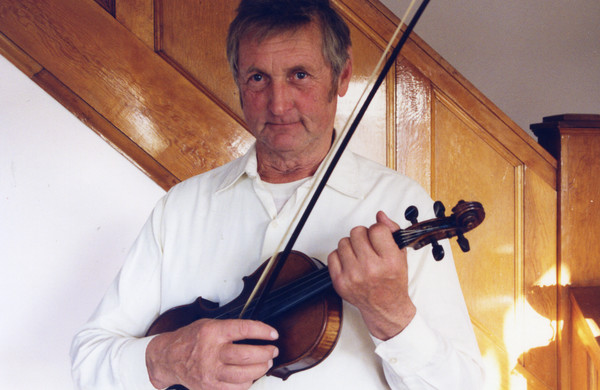 Harry Lecky started fiddling in his teens and was playing for local house parties, hall dances, and weddings by about the age of 20. He learned much of his early repertoire from his maternal uncle Alton MacIsaac. Well-known Prince County fiddler Guy Boulter was a near neighbor; some other fiddlers from his immediate area are Wilf Silliker and Alton Silliker.House parties: O’Leary environs
Read transcript

Harry Lecky likes to make a distinction between fast fiddlers (ones who are good at playing jigs and reels), and slow fiddlers (those who prefer to play song melodies, waltzes, and set-tunes). Using this rubric, Lecky definitely falls into the latter cateogory: he does a nice job on jigs and reels, but it is on slower tunes that he truly excels.

There are two aspects to Lecky’s playing that seem to be virtually unique in his region. For one thing, he is able to sing and play fiddle simultaneously (illustrated on Put Me in Your Pocket). To expedite combining these two activities, he has learned to play with the fiddle held well away from the chin: cradled into the lower arm and braced against the abdomen. On the strength of this unique ability, he is often asked to accompany himself on fiddle for leading hymn-singing at local churches.

Second, Lecky makes extensive use of what might be called American-style syncopated bowing as a method for elaborating melodies. Most fiddlers in central and western PEI rely on suppressed downstrokes to “drag the beat” (that is, isolate an accented melody note between the beats). Harry, on the other hand, is able to drag the beat via precisely placed bowstrokes, without needing suppressed downstrokes to serve as place markers. His mastery of this technique explains the delightful swing that he achieves on such pieces as Beautiful Sunday, Walkin’ Uptown, and White River Stomp.

For the last few decades, Lecky has joined groups of musicians who practice regularly and then perform for seniors at nursing homes and hospitals. In 1992 he often played with a group led by Bernice and Warren Leard. When the Leard group disbanded, he began working with his 2006 accompanists: Cook, Blanchard, and Hardy.