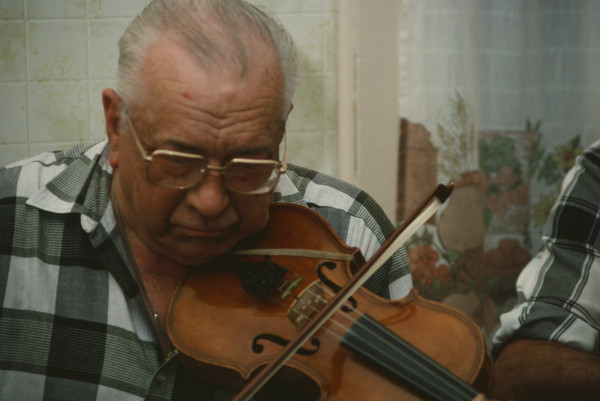 Dan McPhee’s forbears came to PEI in the late 18th century among the first waves of Scottish settlers. He was the son of noted fiddler John Joe McPhee, and brother of Hughie McPhee.McPhee clan history
Read transcript

Dan started fiddling at age 10, and learned both to play and read music through a mail order home study course published by a Chicago firm called the United States School of Music (he and older brother Fred McPhee both made it through the first 24 lessons). Once he had learned to read, he was able to add to his repertoire by mining his father’s extensive collection of fiddle tune books. He also learned many tunes by ear by listening to the fiddlers who played at local music parties, schoolhouse dances, and benefit dances in the church halls. He also recalls dances sponsored by a local firm at a potato warehouse in Souris.Dancing at Souris warehouse
Read transcript

Fiddlers on radio and recordings also served as important repertoire sources. When Dan was young, he often listened to Québecois fiddlers such as Joseph Allard on CHCN out of New Carlisle, Québec; he also listened to Hélaire Gallant and Al Dowling on Island radio, and to Tena Campbell on a program called Cottar’s Saturday Night on CJCB out of Sydney Nova Scotia. In later years, he listened extensively to such early Cape Breton recording artists as Dan J. Campbell, Angus Chisholm, and Angus Allan Gillis.

McPhee left the Island c. 1950 to pursue work opportunities in Ontario, but kept up his interest in the music by attending dances at the Down East Club in Toronto and joining the Toronto Fiddlers’ Club. He returned to Bayfield nearly every summer to visit his brother Hughie and partake of the local music scene. For many years he attended practices of the Eastern Kings Fiddlers and often performed with them at the Rollo Bay Scottish Fiddle Festival. He also was a frequent solo performer at the Rollo Bay Festival, the Monticello Ceilidh, and at benefit concerts throughout Northeastern PEI.