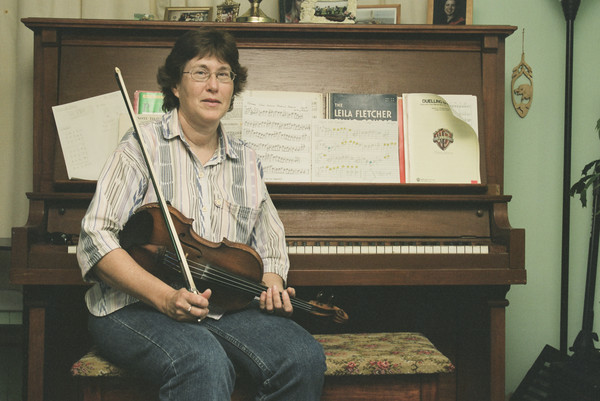 Amy Swenson is one of PEI's new wave of violin teachers. Since moving to the Island in the 1990s, she has played a major role in the promotion and preservation of fiddling in central and southern Kings County. She has gotten literally hundreds of youngsters started on the instrument and also been highly active in introducing tunes from other musical traditions to the local repertoire. Her emphasis on relatively formal approaches to technique, and on learning note-reading first and foremost are sure to have a major effect on the next generation of local players.

Amy was living in the Pacific Northwest when she happened to read in the introduction to Fiddle Music of Prince Edward Island about a shortage of violin teachers on PEI. Soon afterwards, she decided to move to PEI and set up shop as both a teacher and violin repairer. In 2006, she was teaching a few dozen students each week. She is especially proud of having had the opportunity to introduce the grandchildren of once prominent local fiddlers to the instrument. She is also quite excited about the introduction of a new fiddling program to the Donagh school system.Swenson, Amy (speech) - Setting up shop on PEI
Read transcriptTeaching fiddlers’ grandkids
Read transcriptSwenson, Amy (speech) - Donagh Schools Fiddle Program
Read transcript

In 2006, Amy was playing regularly in a band called the Murray Harbour Six. Not long afterwards, she helped found the Southern Kings Fiddlers, a new branch of the Prince Edward Island Fiddlers' Society based in Montague.

In 2011 she collaborated with Frank Lechowic in revising A Composition of Fiddle Tunes, Emmett Hughes' book of original fiddle tunes from Prince Edward Island, first self-published as two volumes (1991 and 2000). This was just in time for Hughes' 90th birthday.

Amy has played second violin with the Strathgartney Orchestra in Charlottetown since 2009. Orchestra Director Leo Marchildon recentycomposed a piece called "Canada Our Dear Home" which featured several recently composed Island fiddle tunes along with singing in Micmac, French, and English. The piece was a great hit at its premiere in January 2015.