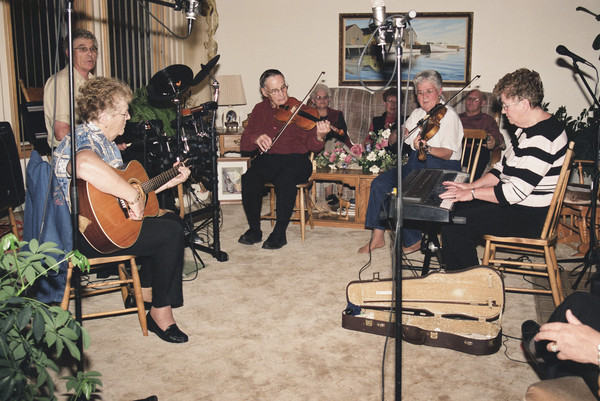 In 2006, Mary Pineau Smith was the local officer for the Maritime Fiddlers Association, which promotes what is now known as Maritime fiddling, a style pioneered by Don Messer and later exemplified by such players as Ivan Hicks, Graham Townsend, and Ned Landry. One of her duties was to sponsor an annual fidders’ convention known as a Fiddle-Do (she composed the Fiddle-Do Polka in honor of one such event, which drew about 400 participants from all over the Maritimes). At the time, Mary was also the organizer of the annual Fiddlers and Followers Weekend at Rainbow Valley Theme Park, and was the leader and guiding force behind  the band, Mary Smith and Friends.

Mary Smith’s father George Pineau was a fisherman, and for 34 years he also served the local lighthouse keeper. He played mouth organ and “jigged” tunes quite well, he played a bit of fiddle, and was a great story teller (one tune he frequently played on harmonica is George’s Tune). Pineau also delighted in organizing impromptu music parties. The whole family step-danced and much of the community enjoyed gathering for square dancing, the most popular variety of which was the Lancers.Music in North Rustico
Read transcript

There were only two accomplished fiddlers in the area – Leo Allen and Alphonse Gallant – but for a while there were no guitar players. Mary got hold of a guitar, learned to play, and for years was much in demand for accompanying fiddlers at local dances and concerts. She didn’t become interested in playing fiddle herself until the late 1990s when she was nearly 60 years old. Neverthless, she has since become both an enthusiastic amateur player and – as noted above – a tireless organizer of fiddling events.

The selections available on this page all represent performances by Mary Smith and Friends.