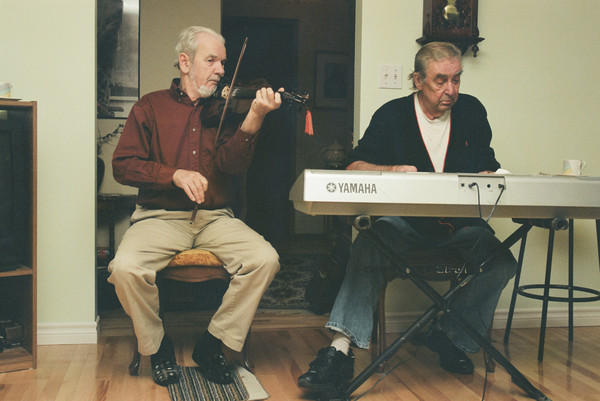 Francis MacCormack was the youngest in a family of 11 children. His father Oliver MacCormack and several older brothers played fiddle, but as the youngest he was simply forbidden access to the family instrument. One strategem Francis resorted to was creating a makeshift instrument using a cedar shingle, a sardine can, and heavy thread; another was sneaking the family fiddle (with his mother’s collusion) for brief periods while his father was busy with outside chores.MacCormack, Francis - MacCormack gets started
Read transcript

As was the case for many Island youngsters of his generation, MacCormack taught himself to play through observation and careful listening, and with little adult input or supervision. As it happened, MacCormack proceeded so independently that when he first unveiled his musical skills, his father and brothers were taken completely by surprise.MacCormack, Francis - He surprises his family
Read transcript

In the late 1940s, Francis would often accompany his brothers to house parties and hall dances all along the North shore of Kings County. Most of the time, fiddlers like Joe Pete Chaisson and “Old Peter” Chaisson would do most of the playing, but the MacCormacks would often do their part and provide the music for a dance or two over the course of an evening.

Francis left PEI in 1953 to pursue work opportunities in the Toronto area, and returned to the Island upon his retirement in 2000. His fiddling style shows a lot of borrowings from central Canadian and US fiddling. His flowery style of waltz playing, for example, is not at all typical of Island style. Similarly, the elaborate variations he has created for simple tunes such as Home Sweet Home and Redwing are also unusual in Island tradition.

While visiting the Island in August 1992, Francis attended the Monticello Ceilidh. We happened to be there that night recording the proceedings, and there is a video clip available of him accompanying part of a square set.

In 2006 – filling a void left by the death or debility of many older traditional fiddlers in Central and South Kings Counties – Francis was often on call to play for dances, ceilidhs, town days, and senior citizens homes throughout the region.