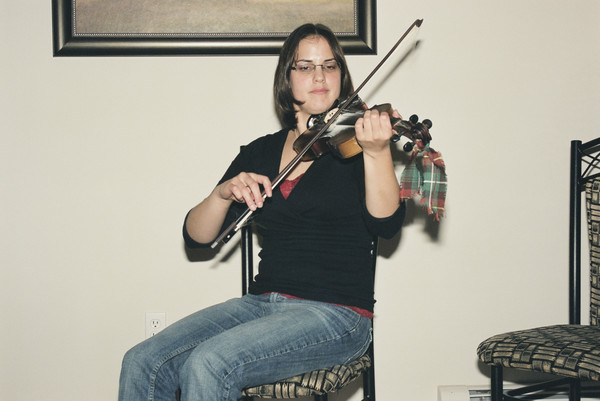 Sheila MacKenzie (now Sheila MacKenzie Fitzpatrick) is a prominent new-generation fiddler on PEI. She started step-dancing at age 5, and then began studying dancing and fiddling respectively with Cecilia and Anne MacKinnon of Richmond, Prince County. She joined the Rollo Bay Fiddle Instruction Program in the late 1980s and was a student there until 1993. Following that training, she started playing for step-dancers and square sets at the Monticello Ceilidh, and also began playing regularly at the Goose River and St. Peters Circle Club Dances. In 1997, she joined a band called Fiddlers' Sons and performed with them regularly for several years. In 2006 she became the first female president of the PEI Fiddlers' Society Executive Board. She now works in a band called Celtic Ladies, which in 2006 won the prize for Best Band at the PEI Music Awards. She has released a self-title CD entitled Sheila MacKenzie, and she has also composed a few tunes of her own; one of these tunes – Matthew’s Jig – appears here.Getting started; playing for dances
Read transcript

MacKenzie is a strong, highly rhythmic player with a nice sense of phrasing and lyricality. Much of her repertoire is drawn from Cape Breton, but her style can be described as a blend of Cape Breton style and several Island regional styles, all of which she encountered during her youth through the playing of such fiddlers as “Young Peter” Chaisson, Francis MacDonald, George MacPhee, and Angus McPhee

An acute social observer, Sheila explains why at one time on PEI women were discouraged from fiddling, and why these days more young women than men are drawn to the instrument. She is also concerned that the most recent crop of players has not been exposed to the music of the old-timers, and therefore may lose its stylistic connection to past generations.Women not encouraged to play
Read transcriptMacKenzie, Sheila - Now more women play than men
Read transcriptYoungsters not exposed to old-timers
Read transcript