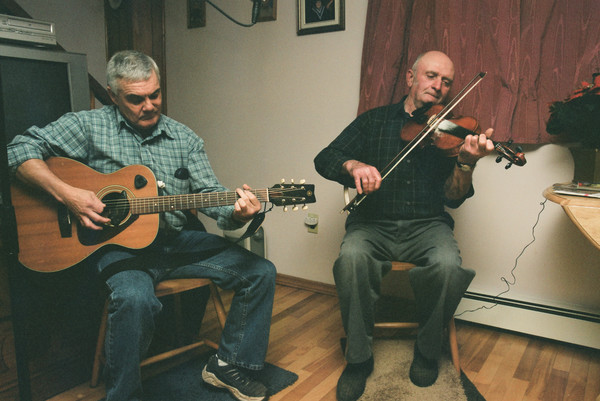 When Tony Smith was growing up he had high quality fiddling all around him. For one thing, two virtuosos – his distant relatives Reuben Smith and Larry Smith – lived right nearby. What’s more, Joe Pete Chaisson, “Old Peter” Chaisson, and other great fiddlers from northeastern PEI often attended Larry Smith(s house parties.

Tony very much enjoyed attending fiddle contests, particularly the big ones held at a big hockey rink in Charlottetown called the Forum. At one contest when famed Cape Breton fiddler Winston Fitzgerald was judging, a player no one had ever heard of wandered in off the street, demanded to play, and won the hearts of the crowd.Smith, Tony - Unheralded fiddler plays beautifully
Read transcript

Smith started playing fiddle in his mid-teens, taking lessons at first from Charlottetown area fiddler George Weatherbie, then adding to his repertoire by listening to other fiddlers at dances or on the radio. Before long he was playing regularly at local house parties. He was drafted to play for his first hall dance when the scheduled fiddler had too much to drink and could no longer manage the task.

After Smith moved to Rustico in the 1960s, he played for many years at a weekly square dance. In the 1970s he became a founding member of the Queens County Fiddlers. He often played for seniors organizations on a volunteer basis; one group he belonged to – which also included fiddlers Fenner Myers and Fr. Charles Cheverie – played regularly for seniors in the nearby district of Brackley.

Tony Smith is a fine dance player with a strongly rhythmic style. One interesting aspect of his playing is his frequent use of West Prince style syncopation, a technique that is generally used more sparingly among Queens County players. Fiddlers in particular might be interested to see how he uses this style of syncopation to enhance his version of St. Anne’s Reel.Enhancing a tune via syncopation
Read transcript

Another Story: Smith tells of a fiddler who thought he was being paid with silver coins but later discovers they are merely foil covered pennies.Smith, Tony - A dirty trick is played
Read transcript

Of further interest to fiddlers. Smith describes a dance game called the Paul JonesSmith, Tony - Paul Jones dance game and tune
Read transcript, and plays a tune once used to accompany it.