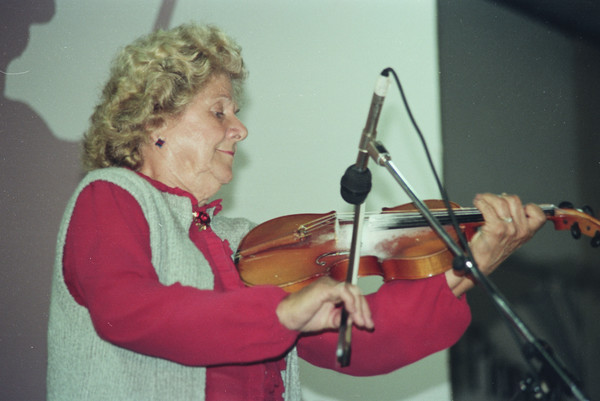 Zélie-Anne “Zella” Arsenault Poirier comes from one of the best known musical families of her region. Her father was the well-known fiddler Joe Bibienne Arsenault, who came to PEI from Québec and brought along “ some old crooked [difficult] tunes.” There were 14 children in the family; just about every one of them step-danced and played fiddle or guitar, so quite often they had musical evenings at home.Musical evenings at home
Read transcript

Zella started fiddling at age 8; she taught herself by emulating her father and older siblings. Learning the tunes was no problem: “I'd heard so many tunes you wouldn't believe; my head is full of them there. I heard them in the house and on the ra​dio; you just hear them once, then you learn it!” She played for her first dance at 16, accompanied on guitar by one of her brothers.

Zella and her sisters Louise, Kate, Rita and Mary were among the first women fiddlers on PEI to play regularly at community dances and entertainments: "We'd get five dollars a night and we'd have to drive there with a horse and sleigh in the winter time. You'd play all night and you'd freeze to death on your way home. Anybody that had a house party, they couldn't find any fiddlers, they'd call and we'd all go."

Zella also plays fiddle tunes on harmonica (Irish Washerwoman, Over the Waves, Mrs. McLeod of Rasay) and is adept at the art of mouth music, known to Acadians as turluter (Old Man and the Old Woman, vocal). She is an expert accompanist on pump organ,and in fact many examples can be heard on Bowing Down Home of Zella accompanying her sister, Delphine Arsenault with that instrument. And like many other members of her family, she is also an accomplished step dancer.

Thanks to folklorist Georges Arsenault for contributing four musical selections featuring Ms. Poirier that he recorded in the 1970s, and to photographer Rodolphe Caron for permission to use his photographs of Ms. Poirier taken in 1981.