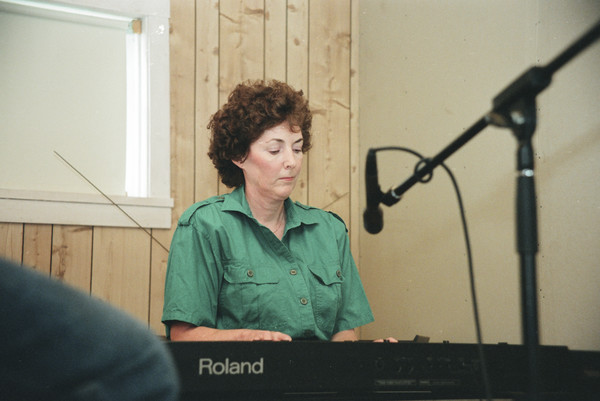 Margaret Ross MacKinnon is one of the Island’s foremost piano accompanists. She came from an extended musical family. Her paternal uncle Martin Ross and her paternal great-uncle Lem Compton played fiddle; and many of her male relatives played bagpipes. Her mother, Grace MacDougall Ross, played piano; and her father, John Alex Ross loved music and could whistle just about every Scottish tune: “He knew them so accurately. And he couldn’t stand to hear anybody play, either the fiddle or the bagpipes, [if it was] not as he called it, 'true.' And I still have it in my head, the Scottish tunes from the way he whistled them.”

When Margaret was growing up, her parents and other members of the community often held house parties, and just about every night the neighbors would gather together for musical visits they referred to as ceilidhs. These ceilidhs went from house to house, but were most likely to land at the home of her grandparents Alex & Charlotte Compton Ross. She also remembers weddings and wedding showers, where neighbors danced for hours on specially built dancing platforms. As it happened, Margaret’s father, a carpenter, built many of these platforms with his own hands.

Margaret learned to play piano from her mother, and to play the pump organ from her aunt Mary Grace Ross. Her uncle Martin taught her how to tune a fiddle and how to play her first tunes; she also learned how to play guitar: "My most poignant early memories are arriving at the Flat River or Eldon Halls on a beautiful summer night and hearing the magic sound of the fiddlers tuning up through the open windows."

By age seven, Margaret was performing solo medleys of Scottish tunes on stage at nearby community halls ; before long she was accompanying local singers, fiddlers, and guitar players, including many of her Flat River schoolmates. She competed in a CFCY talent show at age 10. She started playing for dances at 15, and would ultimately serve as a regular accompanist for Freddy McCullough, Peter Alex Beaton, John Dan MacPherson, and many other top Island top players. She was house accompanist at the Orwell Ceilidh for many years, and was the piano accompanist of the Queens County Fiddlers for its first decade. She has especially fond memories of her stint during the 1980s as accompanist for the Ceilidh Fiddlers, a spin-off of the Queens County Fiddlers that performed around the Island for several years. Some of the well-known Island fiddlers who performed with the Ceilidh Fiddlers were Bill MacDonald, Freddy McCullough, Leonard McDonald, John Dan MacPherson, Reuben Smith, Stephen Toole, and George Weatherbie.

Margaret trained as a registered nurse,  and in 1965 joined the Royal Canadian Army Medical Corps,  where she served for ten years as a Lieutenant Nursing Sister (she was eventually promoted to the rank of Major - the first woman on PEI to attain that rank). From 1990-95, she served as Aide-de-Camp to the Lieutenant Governor of PEI (an official who represents the British crown). During her military career she would often entertain the troops on the upright pianos located in their Messes (dining halls); on PEI she would often be joined there on fiddle by Major John Gauthier, who later helped found the Prince County Fiddlers.

Margaret has been active throughout her life in musical outreach. She has played at countless senior citizens homes and "manors," was often called upon to play piano for events sponsored by the Belfast Historical Society and the Caledonian Club, and helped organize music for the Nov. 11 cenotaph ceremonies at the Charlottetown Legion Home. In 2004, she was awarded a special plaque by the Belfast  Historical Society,  “in appreciation . . . for sharing your musical talents in Belfast and Islandwide.” A year later it was the turn of the Caledonian Club, who praised her many activites aimed at the “promotion and preservation of Scottish culture and music.”