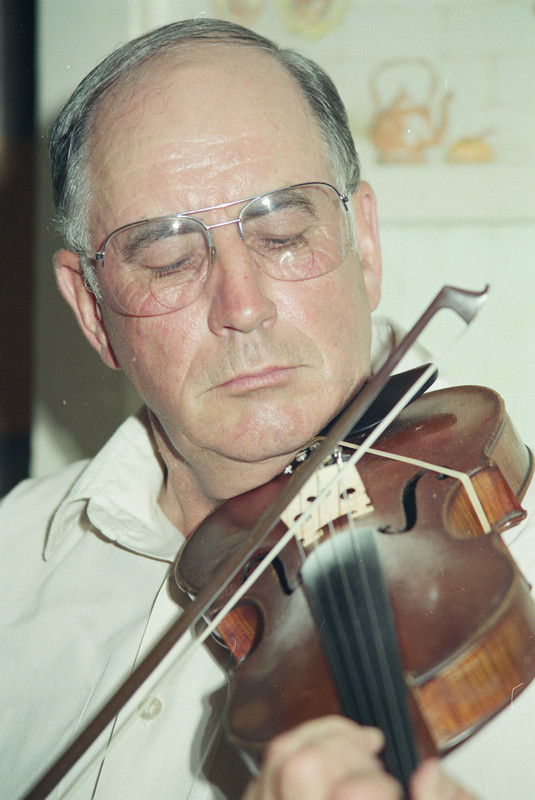 Carl and Jackie Webster are brothers; their father was Jack Webster, one of the great fiddlers of the central and southern Kings Couny regions area from the 1930s through the 1960s into the 70s. When they were growing up, Jack was out playing at area dance halls several nights a week and people often dropped by in hopes that he would play for them. Jack achieved brilliant tone and a rhythmically compelling style despite only having the use of three left hand fingers.Jack Webster’s career
Read transcript

The two brothers didn't get much encouragement to play fiddle during childhood, and both of them started relatively late: Jackie in his mid-teens and Carl in his late 20s. They had many of Jack’s tunes in their heads of course, but a lot of their more recent repertoire came from listening to radio broadcasts and recordings of Cape Breton fiddlers: most notably those of Winston “Scotty” Fitzgerald.

During the 1950s, Jackie played frequently at local house parties and sometimes filled in for his father at dances when the latter took sick. When he got a permanent job on the Bordon-Cape Tormentine ferry, however, his hectic schedule left him little time or inclination to play. As he approached retirement in the late 1980s, however, he began playing much more regularly. Soon Carl and Jackie (who live directly across the road from each other) started meeting regularly to play, both for their own enjoyment and in performance at benefit concerts and music parties. Their duets are of particular interest because they play in nearly perfect unison: a phenomenon that is quite rare among ear players on PEI.

Carl & Jackie had been playing less frequently in the few years prior to the 2006 recordings. Much of their old magic returned on that occasion, however, at which they were accompanied by Jackie’s son John Webster, who also plays in the well-known Island group Fiddlers’ Sons.