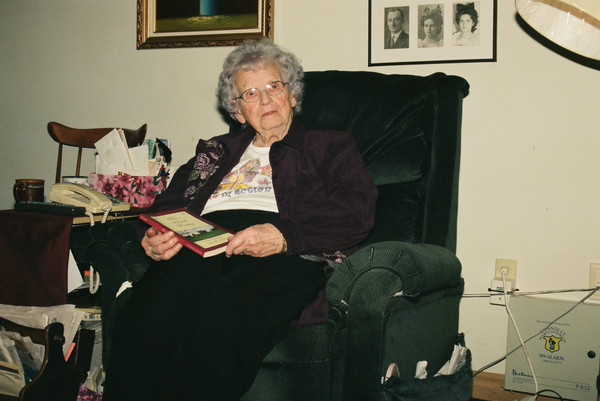 Ella Thomson Chappell contacted me after an article appeared about the project in the Guardian, and told me that she was not a musician, but that she had some memories of the old days to impart. As it turned out, she had a wealth of vivid memories that brought the details of life in the old days into vivid relief – how they watered the cattle and gathered potatoes, how they got to school and went visiting in the winter, what it was like to teach and learn in the old country schools, what community planning meetings were like, and so on. In the end, I felt my time had been well spent, indeed.
Read transcriptChappell, Ella Thomson (speech) - Winter travel by horse and sleigh
Read transcriptChappell, Ella Thomson (speech) - One room schools
Read transcriptHow they planned events
Read transcript

Chappell was born on a farm in Tryon; her family moved to Cornwall when she was a teenager; after she married, she became a farmer's wife in York, on a property that would ultimately be appropriated by the province to serve as part of the Charlottetown airport. About 1970, she started writing poems about local people and events; soon it became customary for people in the area with an anniversary, award ceremony or other special occasion to ask her to write a poem to be read at the event. Around 1995, her family published a collection of her verses called Ella's Island Poetry.