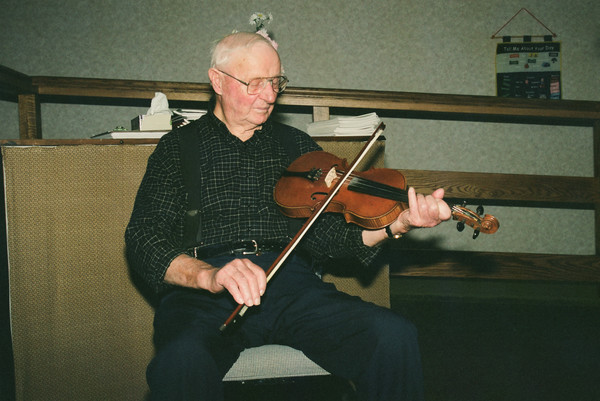 Reg Mellish grew up in a relatively well-to-do farm family that seems to have regarded music and dancing as non-productive foolishness. Nor was there was much in the way of music and dance in his community. As he puts it, “I never went to dances. My family didn't do that. We were busy farmers, we had to do a lot of work. Night time we were tired. We always went to church, Sundays.”

Nevertheless, when Reg was about 20 he took a notion to play the fiddle, and – because he found the activity soothing – he taught himself to play by listening to the radio. He never had any interest in playing jigs or reels, but was instead drawn to song melodies, which he worked out by exactly matching the movement of the bow to the syllables of the lyrics (that is, to the note-rhythm) of each verse.Mellish, Reg - How Mellish got started
Read transcript

As an aside, Mellish’s family was often on the local technological cutting edge. His father bought an engine and threshing machine early in the 20th century; one year he threshed grain for100 different farmers. In 1928, the family was one of the first on the Island to purchase an autombile, and in 1939 they were one of the first Island families to obtain a tractor (for quite a while Mellish did a lot of “custom work,” plowing and harrowing the fields for other farmers). Carrying on this tradition, one of his sons pioneered the practice in North America of putting sileage to mature in long plasting tubes instead of stacking it in old-fashioned silos.