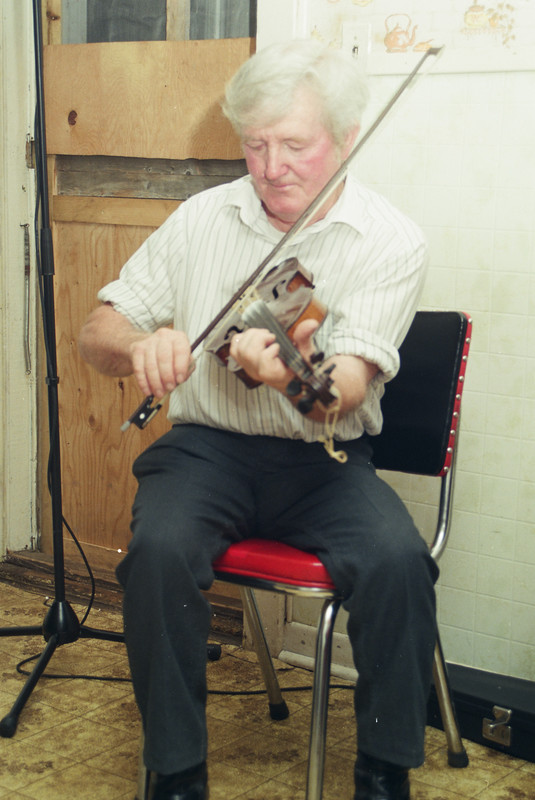 Jimmy O’Connor has a soft, sweet style of playing, and he generally prefers playing waltzes and set tunes to playing jigs and reels. There was no one in O’Connor’s immediate family who played the violin, but his maternal grandmother – a Benoit from Newfoundland – had two brothers who played the instrument; well-known Newfoundland fiddler Emil Benoit was her grand-nephew.

O’Connor grew up with plenty of music around him. His grandmother used to jig fiddle tunes around the house and step-dance. His father whistled tunes around the house and step-danced, and local families took turns hosting house parties. There was also dancing at weddings held at High Bank Hall. When the parties came to Jimmy’s house, he would often sit next to the fiddler and listen closely. Years later, when he took up the instrument, he found that many of the tunes they had played had stuck in his memory.

When Jimmy was about 15, a friend rigged up a makeshift fiddle for him by inserting a high bridge onto a ukelele. He learned a lot of tunes from his sister, who came home from dances and jigged to him the music she heard. He also learned tunes from radio: from Québecois fiddlers on CHCN, New Carlisle; and from fiddlers he heard on Charlottetown station CFCY.

The local fiddler whose playing O’Connor most admired at the time was Dave Beck. Hoping to learn a thing or two from the master, O’Connor and some friends knocked on his door late one night and got him playing.They roust Beck out of bed
Read transcript

Some other fiddlers who played regularly in the area then were Laurie Gormly, Clarence MacLean, Danny MacLean, and Harmon White.

As a young adult, O’Connor played widely for house parties and weddings within a ten-mile radius of home. And nearly every weekend, he and a cousin who played guitar would go out to Will Glover’s place in Abney and play tunes all day into the evening.