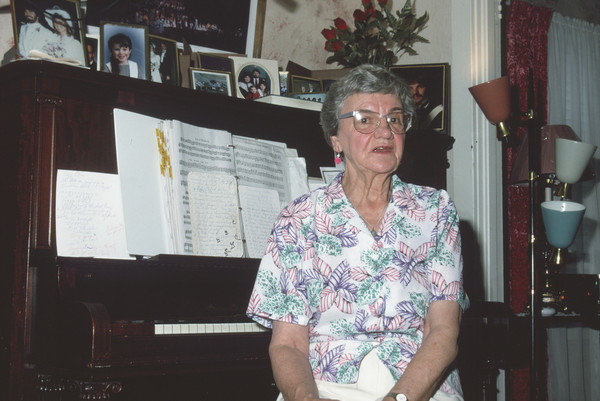 Rita MacDonald Morrison grew up close by the family of fiddler Joe MacDonald, and members of the two families often played music together. Her family generally hosted most of the local house parties. Among the fiddlers who played at these and other local dances were Louis Cameron, Fred MacCormack, Joe MacDonald and his brother Allan, and two M’ikmaq players: Martin Thomas and Joe Scully.Morrison, Rita MacDonald (pno) - Families that play together
Read transcript

Most of the musical talent in Rita’s family came from the mother’s side (MacDonalds from Maple Hill in Pisquid). Rita learned to read music and play piano and pump organ from her mother, who in turn had learned from her own mother, who had received formal music training.

Rita had a “sharp ear” and taught herself how to chord behind fiddlers. She also learned to play fiddle tunes right out (note-for-note) on keyboard, an art that she illustrates in her renditions of Old Grey Bonnet and Princess Reel.

When Rita got married, she moved just a few miles down the road to Savage Harbor. There were far fewer parties there, however, and for years she didn’t play very much. She slowly got back into playing after she was widowed in the 1970s. Since then, she regularly accompanied such fiddlers as Bill MacDonald, Fr. Faber MacDonald, and Francis MacDonald. She also served for many years as the regular accompanist for the Queens County Fiddlers.

Because it seemed to be out of the question for women at the time , Rita never considered playing the fiddle when she was young. When attitudes changed on the Island in the 1980s, however, she took up the violin and quite enjoyed the process of learning.Morrison, Rita MacDonald (pno) - Fiddling once not for women
Read transcript