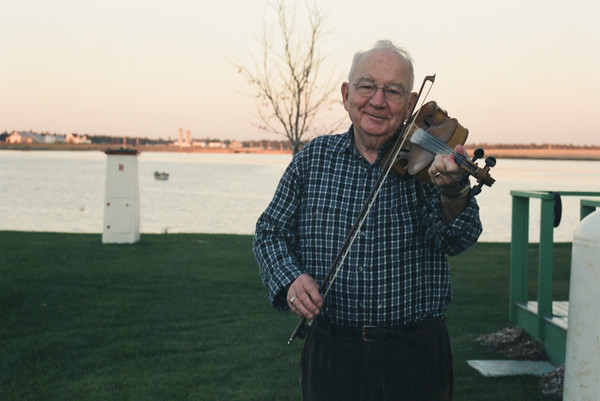 Ervin Rafferty, 2006; behind him is the Foxley River

Ervin Rafferty’s forbears came to the Foxley River area from Ireland in the 1820s, eventually settling in the district in north-central Prince County that bears their name. Ervin grew up on a farm not far from an estuary that empties into the Gulf of St. Lawrence, and his family’s yearly round of activities – gathering cranberries and marsh hay, smelting, eel fishing, and so on – was strongly affected by this proximity.Raffertys come to PEI
Read transcriptFarm chores along the Foxley River
Read transcript

There was no fiddling in the immediate family, but his household was musical and his father was an avid step-dancer. When Ervin was young, square dancing at house parties,weddings, and benefit dances was the area’s primary leisure activity. Two of the fiddlers who played many of these events were Lenie Bolger and Elmer Robinson. Robinson not only played at Rafferty’s own wedding in 1946, but he also played at the latter’s 40th and 50th anniversaries. Rafferty notes that just after the war, so many weddings took place that young couples had trouble lining up fiddlers to play for them.Rafferty, Ervin - House parties around Rafferty Road
Read transcriptBasket socials
Read transcriptRafferty’s wedding
Read transcript

Rafferty learned to play in his mid-20s, after he came home from the Second World War. Although local interest in square dancing had declined substantially after the War, he often played at music parties and benefit concerts. He developed a shoulder problem not long before his recording session that made it difficult for him to play without pain; that did not stop him, however, from getting together regularly with other musicians to help entertain at local Senior’s Citizens Homes. Ken’s Tune is his own composition.His neighbors lose interest in traditions
Read transcript