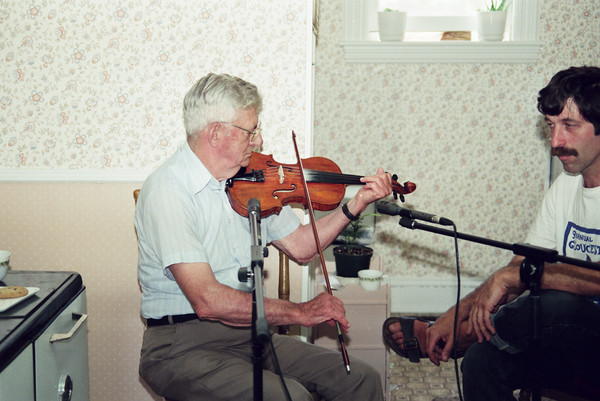 Jimmy Banks grew up virtually surrounded by good fiddling. Both his father John Daniel Banks and his uncle Patrick Banks played for local dances, as did his neighbors Charlie and Barney MacMaster, and Anais Campbell. Sometimes fiddlers from Northeastern Kings such as Neil Cheverie and Pete Simon Chaisson (grandfather of Kenny, Kevin and “Young Peter” Chaisson) would come down to Poplar Point to play at local house parties and benefit dances.

Jimmy started fiddling at age 9, and learned his repertoire by ear from listening to all these good players. Mostly he had to figure things out on his own, but occasionally he would get a few pointers from older players. He started playing for local dances when he was about 20: “Most every community had a hall or a center where they held entertainment,” he said. “They used to have concerts and dances and parties of different kinds. Then there used to be Tea Parties, too, and picnics in the summertime, and they always had square dancing [there], mostly all square dancing in them days.”Banks gets help from older players
Read transcript

Banks tells us that it was routine at these events to be asked from time to time to play for step-dancing. He also notes that the old style of step-dancing was quite different from the style that developed on PEI after the 1970s, and that each dancer used to have their own special tune they liked to dance to.Old-fashioned Island step-dancing
More info

In the late 1930s, Jimmy and a few other young people from the surrounding area put a band together that played for dances throughout the eastern part of the Island. The instruments featured were fiddle, mandolin, piano, and (occasionally) guitar. Jimmy and another fellow played fiddle, but – following Island custom – they generally took turns on the instrument instead of playing together.

Banks composed a number of tunes, two of which – Patsy MacDonald's Reel and Poplar Point Reel – are included here.