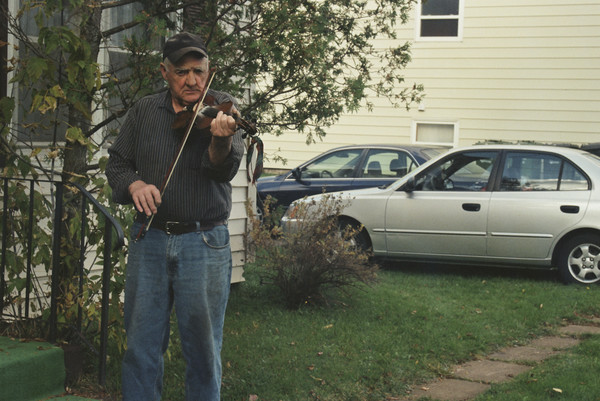 Cecil Trainor at his home in Charlottetown, 2006

Cecil Trainor grew up surrounded by traditional fiddling in central Kings County and while young he often danced to the music of Jack Webster, the Hughes family of Dromore and others. The main fiddlers who played at local house parties were Jack Smith, and three members of the Connolly household: Louie, Cecil, and Jimmy. One major event in the area where there was always plenty of fiddling and square dancing was the annual Church Picnic at Peakes Station.
Read transcriptChurch picnics around Peakes Station
Read transcript

Cecil bought his first fiddle for $6 from Eaton’s catalog when he was just a youngster, and was making good progress on it when in 1948 the instrument got destroyed in a house fire. He pretty much got away from the instrument as a young adult and came back to it in the late 1970s at about age 35, inspired by the founding of the PEI Fiddlers’ Society. A founding member of the Queens County Fiddlers; he now teaches fiddling on a volunteer basis as part of a local adult education program known as Community School..