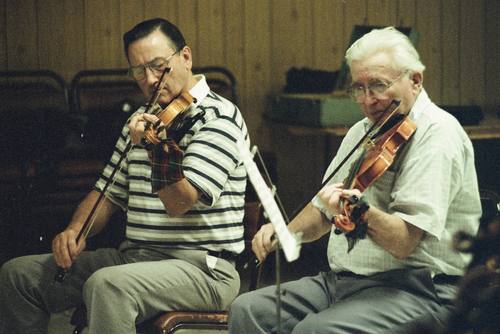 Ed started playing at about age 18, when he picked up an old two dollar fiddle. He said, “I’d just take it into the barn and hang it up on a nail [when I was done]. I just gradually learned, and [now] I have it half right and half wrong. That’s that's why I can't read music. I never learned it; I was too stubborn to try and I didn't end up too good really. I'm fightin 'er out now!”

Ed soon learned to play well, and he played quite frequently for dances in western Queens and eastern Prince Counties at commercial dance halls, community halls, and house parties. Aside from his native Baltic, some of the communities he played in were Darnley, Irishtown, Kensington and Spring Valley. He recalled that there was no formal wages offered for playing fiddle in those days, but that sometimes people would pass around a hat for contributions.

Ed was a founding member of the Prince County fiddlers and played with them regularly for over two decades.

A recording of Ed Matthew's playing made by Ivan Bowness in 1969 has recently been donated to Bowing Down Home by Melissa Marie Morse and can be accesssed on this page.